A while back I posted about a Skeletor figure with a packaging error I received. I've been displaying him MOC ever since (although it will never be worth money). I finally bought a second Battle Armor Skeletor so I could open one up. 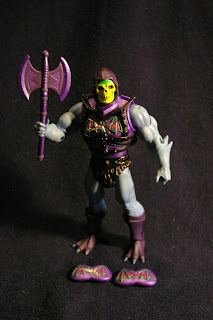 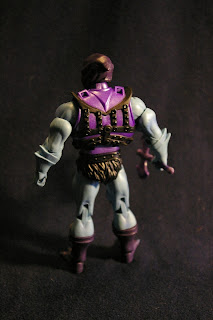 This Skeletor varient comves with special battle armor that has swappable chest plates that simulate battle damage. On the vintage figure his armor has a spring loaded drum inside his chest that would rotate to reveal the damage. He also comes with a purple battle axe. Unlike the first Classic Skeletor this one features painted "monster feet". You could actually swap their armor to help create a more accurate version of Skeletor's vintage figure. 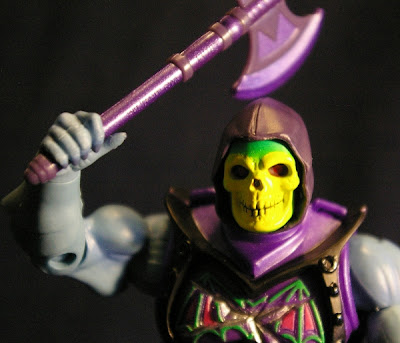 He's a good looking figure, but certainly not a must have. These variant figures used to help cost out the other figures in the line. My making a few figures each year that only needed new armor they could spend more tooling dollars on figures that needed 100% new parts. In the recent sub they have cut back, and I'm not sure if there will be any in the 2014 sub.
Posted by Buzz Chuck at 8:49 PM