Ace Duck was released as part of the Teenage Mutant Ninja Turtles toy line in 1989. He was one of my all time favorite figures from the original line. In fact, when I slimmed down my toy collection in Middle School Ace was one of three figures I saved from my large TMNT collection. He has a great sculpt and awesome accessories. He's a yellow duck dressed in jeans, a leather jacket, and pilot hat.  He is reminiscent of Donald or Howard the Duck. I always wanted Ace to get an episode in the cartoon show, but all he got was a super brief cameo that was more of a sight gag. Maybe Nickelodeon will bring this guy back. 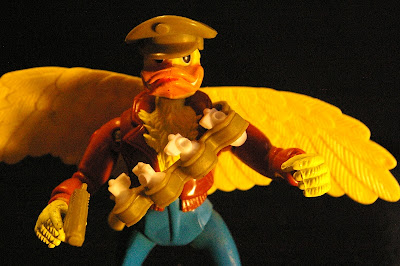 Ace Duck comes with removable articulated wings, a removable hat, a bandolier, four egg grenades, and a pistol. His wings are articulated on a pivot that plugs into his back. They  articulate like a pair of scissors. They can't "flap". His hat has a little post inside that plugs into a hole in his head. Unfortunately this makes it so no one else can wear it. 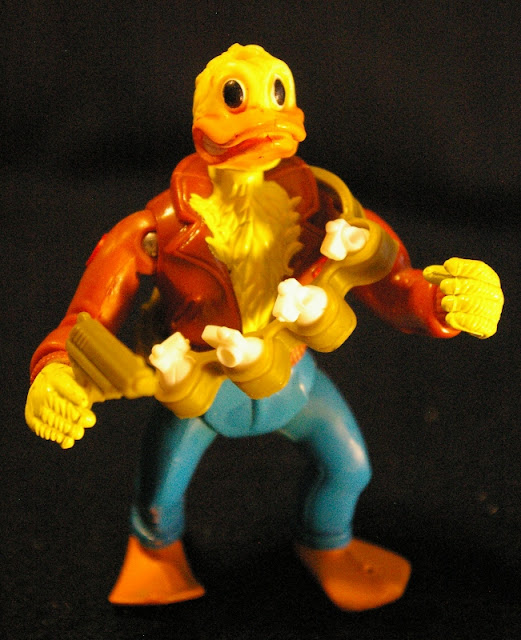 Here is Ace without his hat and wings. The sculpting on the feathers on his chest look really great. He has sort of a wind blown look. His legs are slightly pre-posed like all the rest of the Turtles. 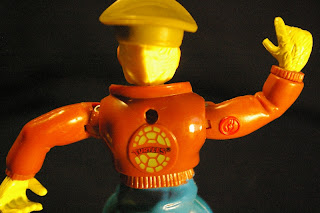 Ace has a cool "Turtles" logo on the back of his jacket similar to April O'Neil. One interesting thing to note about Ace Duck is that his arms are articulated differently that pretty much every other figure in the TMNT line. His shoulders have hinge joints allowing him to "flap" his arms.