After the success of the 1989 Batman movie Toy Biz renamed their Batman toy line and expanded the characters they were releasing. The DC Super Heroes line featured many characters and were based on the old Kenner Super Powers line. Here is the Super Heroes version of the Penguin. I previously posted about the Batman Returns version of the character. I don't own the Super Powers figure, so I'm not sure the exact differences there. It appears that the Super Powers and Batman Return Penguins share a head sculpt, but the Super Heroes version has it's own head. If you look at pictures of the other figures note the size of the nose, shape of the eye, and mouth. You can see that the head is similar but not the same. I have also read there are variations in the tails to his jacket (I'm not sure about that). 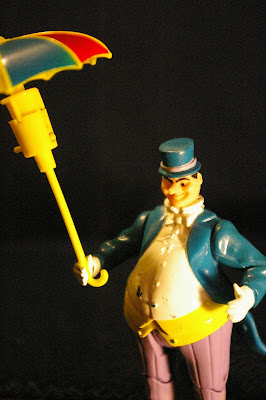 The penguin is dressed in his blue jacket with purple pants. I always wonder if he was supposed to wear blue or black. In old comics, when they only had twelve colors, blue was often used as a highlight on something black.The white paint on his shirt is easily marred, so if you have this figure take care of that. He comes with an umbrella weapon. The handle contains a spring loaded mechanism to launch the umbrella top missile. The mechanism lock is very weak and frequently fires without the button being touched. The coat tails are removable (on this version at least) 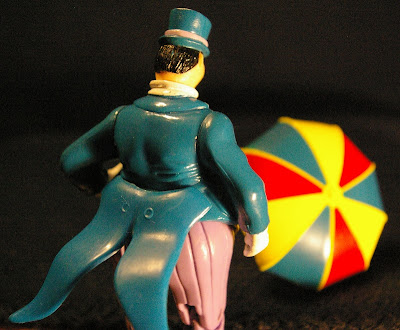