Batman: the Animated Series was an amazing cartoon show. I really enjoyed it and the toy line looked fun, but I already had so many characters from the Batman movie toys I didn't dive into the line to deep. The first Animated Series figure I got was Combat Belt Batman. This is a gimmicky figure done right! Once you remove the "action feature gear" he is just a standard Batman. I'm posting about this figure  today because I got him in my Easter Basket many years ago. (Happy Easter if you're of that persuasion) 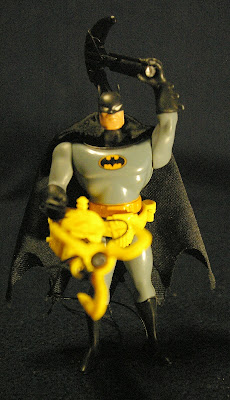 Combat Belt Batman comes with a snap on belt, a spring-loaded missile launcher that attaches to the belt, a grappling hook and rope that can be launched, a giant Batarang that can also be fired, and a set of snap on hand cuffs. 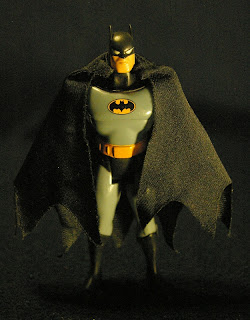 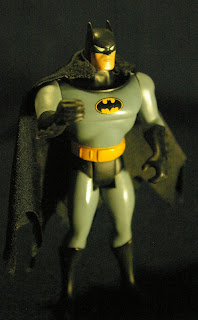 Like the Super Powers and movie figures, this Batman comes with a cloth cape that clips around his neck. The cape is very large and can wrap around his shoulders. This cape is also one of the nicest quality toy capes I've ever seen on an action figure Batman. 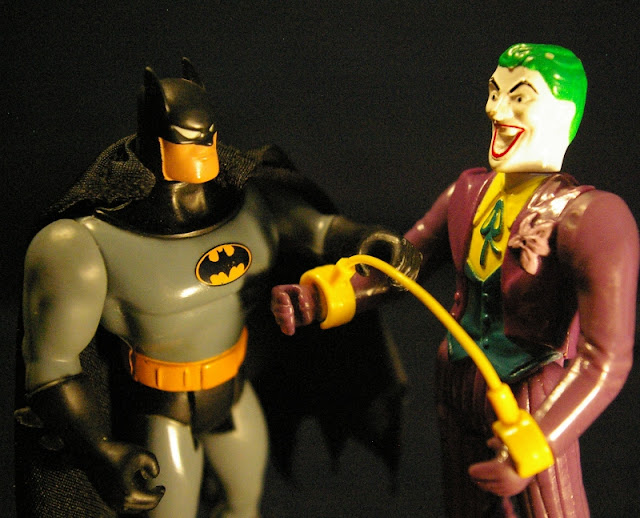 I played with this figure a lot. Here he is putting the cuffs on the Joker. This figure will always have a special place in my collection. He was such a great representation of the character from the cartoon. I even used him in the animated series this blog is named after... Action Figure Adventures. Follow the link to see him in action and voiced by Batman writer Doug Moench.
Posted by Buzz Chuck at 11:49 AM