Obi-Wan Kenobi  was one of the first Star Wars figures I ever owned. He came in a box of toys from a neighbor who had out grown playing with toys. I hadn't seen the movies yet and he came with no accessories. As a very young kid I used him as a generic old man. I at times I used him as a butler because I thought the tube in his hand was the end of a vacuum cleaner. Once I saw the original Star Wars movie I was excited to own a toy from the line. My original Ben Kenobi was the white hair variant. At some point his head broke off and the figure was discarded. I picked up this gray haired version with his vinyl cape at a yard sale later on. 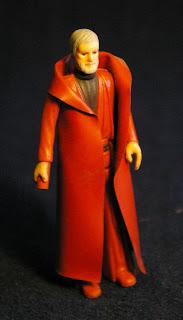 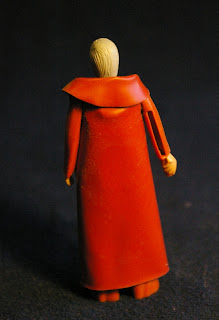 When I was in 3rd grade, at the start of my obsession with Star Wars, my family went to Florida to visit my grand parents. My Grandmother has a cup of colored toothpicks on the dinning room table. I freaked out. Finally I had lightsabers for my Star Wars figures. I got two blue, a green, and a red tooth pick.

I actually think the tooth picks make better lightsabers than the goofy little plastic ones they are supposed to have. Here Obi-Wan and Darth Vader are locked in epic combat. I'm kind of surprised Kenner didn't release a ghost version of Obi-Wan Kenobi back in the day.
Posted by Buzz Chuck at 12:35 PM