During my Freshman year of High School I had the opportunity to meet comic artist Paul Gulacy. He was in visiting from the west coast and was staying at comic writer Doug Moench's house. So at school Doug's son, Derek told myself and a couple of other friends that Paul was in for just a couple of days if we wanted to stop over and meet him we could.

After school I dug through my comic collection looking for stuff like LotDK: Prey, Batman vs Predator II, and James Bond: Serpent's Tooth. All book that Doug had written and Paul had drawn. I got my Mom to drive me over. Paul & Doug were hanging out on the screened-in-porch. They were swapping stories and Paul was doing his Frank Sinatra impression. After I hung out for a little while and got my comics signed I asked Paul if he would draw something for me. I've meet quite a few artists at Doug's before, but this was the first time I had the nerve to ask someone to draw me something (I was in Elementary and Middle school the other times). Paul asked me who my favorite hero was. I replied "Batman & Spider-Man". He said, "I don't draw Spider-Man." I quickly said back "I know, but you didn't specify in your question." Paul, I think getting a little annoyed, said "Okay, Batman... now put your arms up. I need you to pose in a fight stance". After what seemed like forever, and Paul even telling me to keep my arms up after I started to lower them because they were getting tired, Paul revealed this beauty. 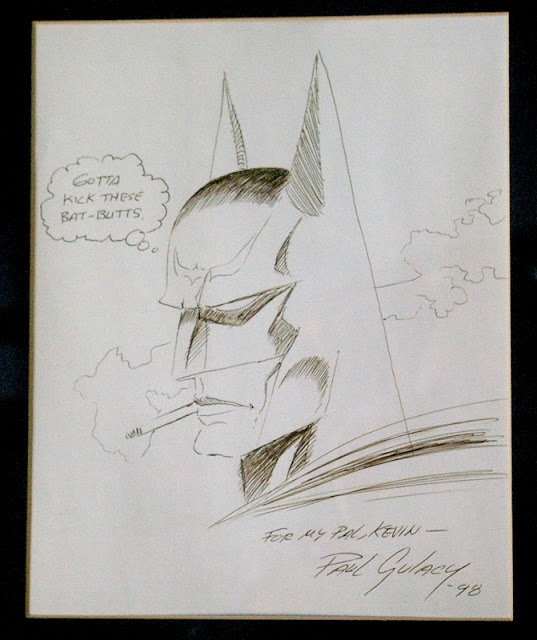 I had to laugh. He didn't draw his body! Clearly Paul was having a little fun at my expense. I can only assume he was inspired to draw Batman smoking because he was talking to Doug, who was smoking while Paul was drawing. Paul's wife saw what he had drawn and started chewing him out for giving a kid a picture of Batman smoking a cigarette. Paul felt a little guilty (or was trying to appease his wife) so he gave Derek and myself each an additional piece of artwork (Look for this in a later post).

My Mom took me to an art store at some point to buy a frame and matte for the drawing. It hung on the wall in my room until I moved out of my parents house. Now it hangs in my dinning room.
Posted by Buzz Chuck at 5:23 PM