Well it's spring time. Flea Market season is here. Unfortunately it's been pretty cold here in Pennsylvania so far this Spring. It even snowed today. Over the weekend I went out to the flea markets, but didn't find anything. I decided to check out the thrift shops today. I hit up the Goodwill that just opened next to my Toys R Us. I didn't find anything so I checked out Slavation Army. I've never really had luck there with toys, but today I found a carded 90's X-Men figure. 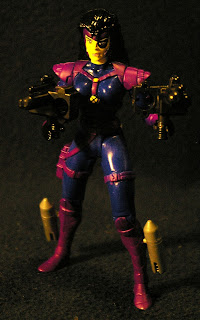 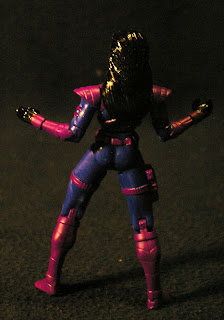 Domino is a member of the X-Force Team and is a weapons expert. The card mentions her "Twin Weapon Arsenal".  Domino comes with two silver missiles that clip to her legs and two black guns that can connect to make one weapon. The missiles are spring-loaded and can be launched from the guns. Domino has shoulder, elbow, hip, and knee articulation. Her elbows are swivel cuts, so her arms can move in and out but not be straightened. 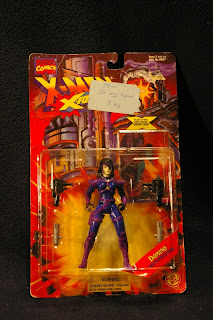 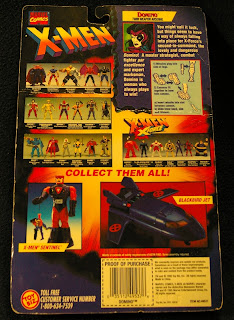 The card was in fairly good shape, unfortunately the people used packing tape to attach the price tag to the card back. They had the figure priced at $3.99 but all toys were 50% off today. I love looking at all the figures on the card back. This figure is from late enough in the line I didn't have two many figures that apear on the package. There are two figures on there that a friend gave me from his childhood collection when I was in college. I ended up giving those figures to my buddy Tony from Action Figs & Things. 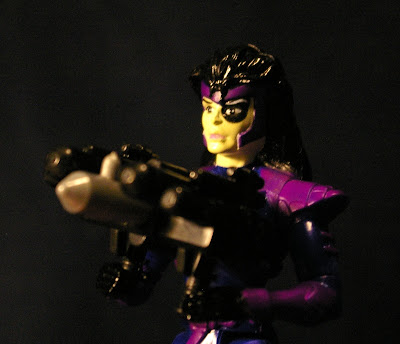 Domino with were Twin Cannon, loaded with one of her missiles. 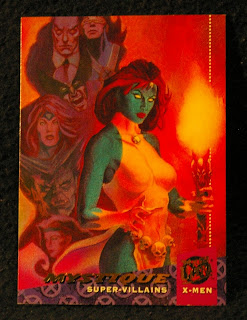 There was also a Mystique trading card as a free pack-in.