Glo Worm (Glow Worm or Glo-Worm) was a popular Playskool product in  the early 80's. The original stuff animal / night light had a vinyl head like a cabbage patch kid and a stuffed body that contained a battery pack. This light up toy was so popular is spawned a cartoon and series of mini figures.

These smaller characters were called Glo Friends. They were made of glow in the dark plastic and each came with a little cloth sleeping bag. 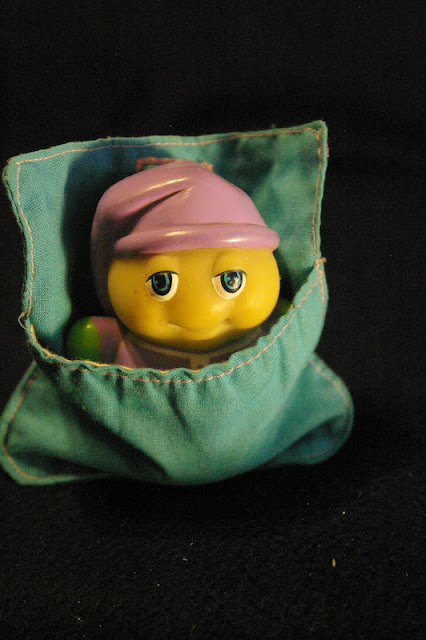 My sister and I always enjoyed this franchise together, much like the Care Bears. I have very vivid memories of playing with these figures in our Grandparent's house in Connecticut. They moved to Florida when I was pretty young so I was really little then.

One thing that was really cool about this line is that I was able to get the characters I actually wanted. With many toy lines I would be missing an important character from the cartoon and it would kind of drive me crazy trying to find that figure.

I had Glo-Worm who was based on the original toy and was the main character. Glo-Grannybug was the wise older member of the group that took care of everyone. Glo-Bug was an adventures character who could fly.


These figures are one piece with no articulation. They have a decent amount of paint apps, and their paint held up well over the years. The figures are hollow and so are fun to play with on your figures tips as a kid. I'm not sure where the other sleeping bags are, and which figure goes with which bag. I think I had also had a light green and a light pink sleeping bag.
Posted by Buzz Chuck at 8:20 AM