As a kid I had a lot of Ghostbuster toys. Some how I was only able to get one of the Ghostbusters themselves from the first wave. So when the second series came out I made sure I got the rest of the team. The second series was called 'Fright Feature' and all the figures has an action feature that made them look scared.

I really love their normal jumpsuits in the movie and the cartoon. Winston's outfit is close to that look. He has long purple gloves and some extra yellow pads but he still pretty much looks like he's wearing the jump suit. 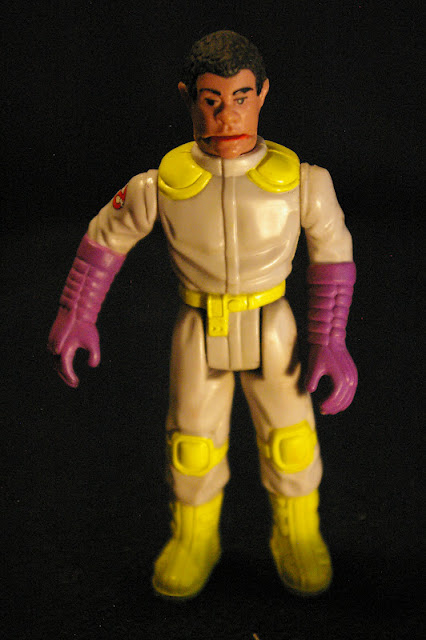 When you squeeze his arm into his body his head spins around 360 degrees. As his head spins the top of his head raises up exposing the inside of his mouth making him look like he is screaming. It's very cartoony, but was fun as a kid. 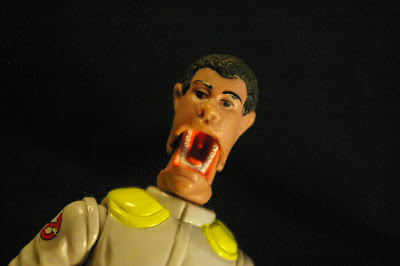 For accessories, Winston came with a green gun and an orange ghost. The ghost could fit over his head or rest on the end of his ghostbusting gun. 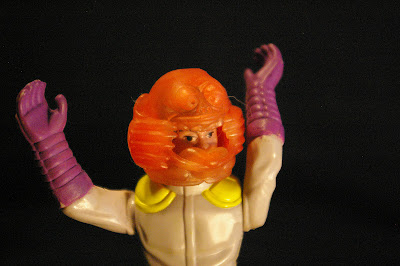 I took a bunch of my Ghostbusters to a friends house one time in elementary school and accidentally left two of their guns behind. On the next school day I told the kid that I left two items there and described them to him. He claimed that I didn't leave them there. I never went to play at his house again.
Posted by Buzz Chuck at 9:42 AM