I've photographed a lot of mini-figures from various toy lines to use as quick updates when I have limited time. Tonight I traveled with a friend of mine up to my parents house, which is about an hour from where I live. We loaded up the table saw my parents gave me when I graducated from high school and brought it to my house. Now I can really get started on setting up the shop in my garage.

So today's mini-figs are from the M.U.S.C.L.E. (Millions of Unusual Small Creatures Lurking Everywhere) toy line. As a kid we always called them Muscle Men. I had one trash can pack of figures and all the rest I picked up at yard sales. 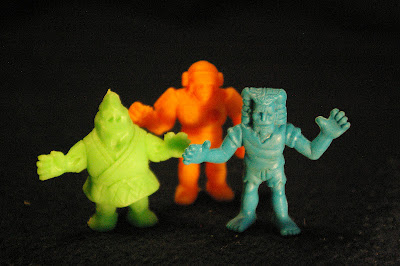 The green guy's head looks like it was whittled from a stick. The orange figure's arm features wood grain. The blue guy looks like he is wearing a pharaohs hat. 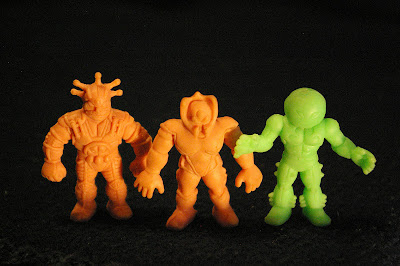 These are some of the weirdest MUSCLE figures I have. They each feature a strange head. 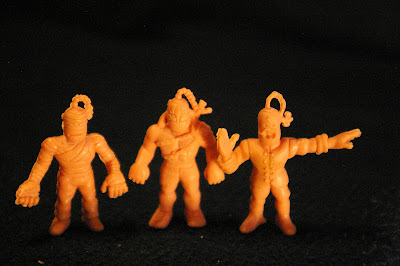 All three of these figures are very similar. Each one has a cylindrical head with a skinny ponytail coming out of the tops of their head.