This Two-Face was released by Kenner in 1995 as part of the Batman Forever line. He came with a giant cannon and a good/evil coin which I do not have. I didn't see Batman Forever in the theatres and I skipped buying any of the toys. Later on I picked this guy up at a yard sale. I like his sculpt, but I'm not a huge fan of the paint. He is not accurate to the movie, and I don't like their changes. His "evil" side skin is crazy pink, but the hand on that side is normal. I also think the animal prints are rediculous for Two-Face. In the movie his hair is crazier on the "evil" side and his suit is all ripped up.

He has standard five point articulation and a gun sculpted into one of his hands. Even though I'm not a huge fan of their paint app selections, they are very detailed. Unfortunatly they didn't carry the paint apps to the back of his jacket which is all black. Kind of like missing painting the "evil" side's hand. You've got to be consistent. 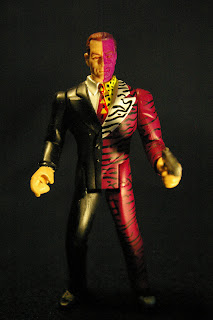 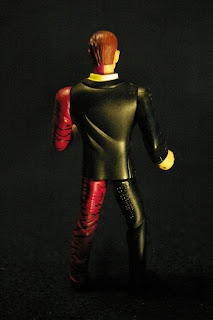 At one point in time some of my friends and I were planning a large Batman stop motion animation project and we wanted to include Two-Face. This was the only figure of him I could readily find. So I picked up a second one and gave him a custom paint job that was more subtle. I took some of the design cues from Batman: the Animated Series. 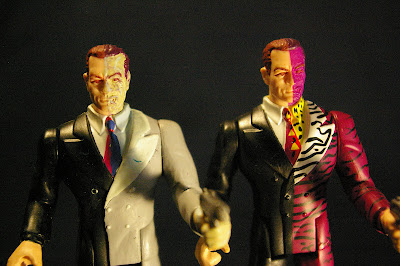 The "evil" side features a pale green skin tone on both his face and hand. His suit is half black and half gray. I always liked the way this custom Two-Face turned out. In the end we never did the animation project and he's just been hanging out in a shoe box with other Batman action figures. 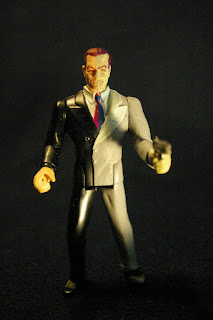 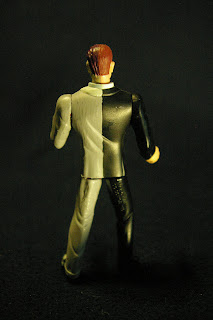