Psylocke, the X-Men's sexy ninja. She's telepathic, telekinetic, and can create psychic knife that incapacitate her enemies. Her back story is kind of crazy with he being a British girl with some special powers who is kidnapped, brainwashed, and physically altered to look Japanese and have incredible fighting abilities. Her powers have changed over the years several times, but she's always seemed cool to me. I kind of prefer her pony tail look, but by having her hair loose Hasbro got to reuse a head mold here. It's kind of a shame that she doesn't have straight hair if it wasn't going to be in a ponytail. This would help make her look more unique when displayed with other girls from the X-Men. 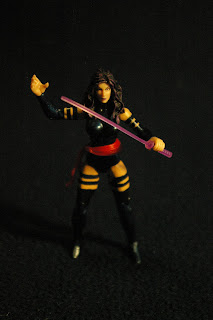 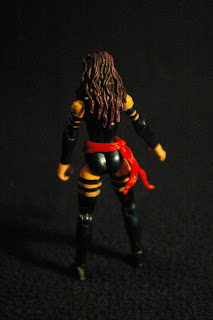 Psylocke is basically all parts we have seen before. She has a red belt, psychic katana, and and energy effect that could pass as her psychic knife, but is probably also a reused energy effect from another hero. She has a nice feminine sculpt and a great paint job. 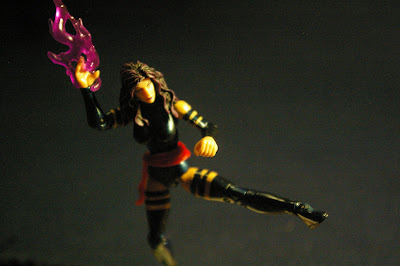 Special thanks to my buddies Scott & Josh for getting me out of the house and to Toys R Us last night. It's been a long time. The end of October can't come soon enough... I'm really starting to miss my drivers license.