1985 is arguably the greatest year in the history of 3 3/4" GI Joe figures. So many great characters and so many great vehicles. Today I'm taking a look at Driver and Vehicle pair that I just loved as a kid. 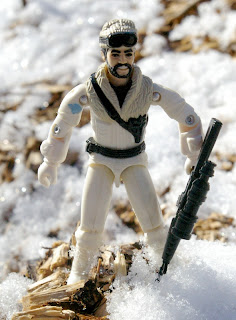 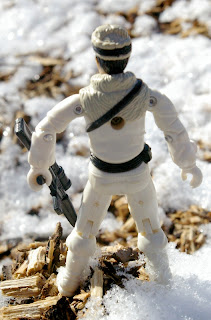 Frostbite is a good looking action figure dressed in a white snowsuit with fur collar. He has a holster across his chest and a furry hat and goggles on his head. He came equipped with a rife with a huge scope.

*Odd customizer fact Frostbite is one of the few GI Joe figures who has no details sculpted on  both his thighs. I have bought lots of Frostbites over the years for making custom figures that don't have holsters and knives strapped to their legs. 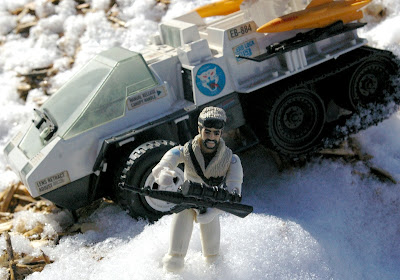 Here is Frostbite standing in front of his awesome vehicle. Both Frostbite and the Snow Cat were repainted and reissued as part of Tiger Force. I really like the Snow Cat logo on the side of the vehicle. As a kid it make be think of Snow Meow from Thundercats. 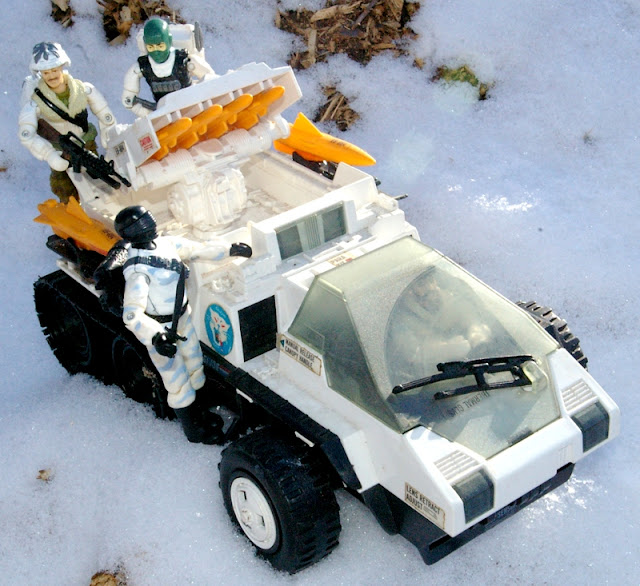 The Snow Cat is a great multipurpose vehicle. It features tires and treads. It can carry up to six action features (the way it is designed). and has two ski missiles and four missiles in it's rocket launcher. As a kid sometimes I'd remove the rocket launcher and pile extra guys in the back (kind of like a pickup truck). The rocket launcher top is a very fragile piece so be careful with it. Along with Frostbite behind the wheel this photo shows off some of my custom Arctic GI Joes (Snake-Eyes, Footloose, & Beach Head - all of them use some of the left over Frostbite parts from other custom figures that used his thighs). 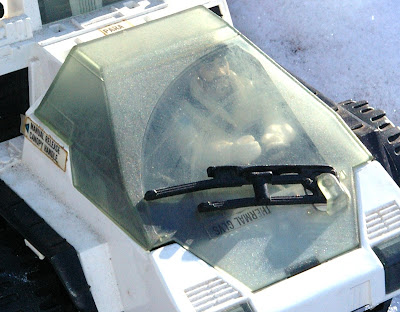 My favorite little feature of this vehicle is the windshield and wiper. The windshield is molded in a clear plastic but is textured to create a fogged look  in the areas the wiper doesn't reach. The little windshield wiper is articulated.