I picked this guy up at a yard sale a couple of years ago. This is a great looking Ra's Al Ghul action figure from the Batman Animated Series. He was cobbled together for the Shadows of Gotham City box set. He uses the head form his original animated series figure on an Alfred body. They gave him a new cape that really completes the character. 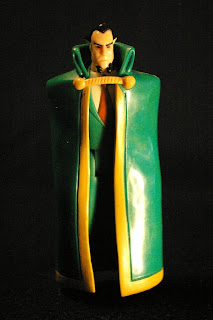 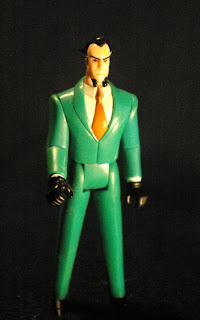 He has five points of articulation and clean paint apps. I would have gone a shade darker on the green of his suit and cape, but they aren't bad. I don't know what I would have done with him if they had made a Super Powers figure of him back in the 80's. Ra's a thinking character. He has no gimmick and therefore is hard for kids to wrap their brain around him. I would love to have the rest of the box set.
Posted by Buzz Chuck at 9:02 PM