Wow, I can't believe it has been a year since my first blog post! Action Figure Adventures (the blog) has been way more successful that I would have imagined. I'm totally impressed that I have had well over 15,000 hits in one year. That's just incredible. It's also really cool that I have developed a strong bond with some fellow bloggers who are frequent commenter here at AFA.

A really big dream come true for me is that the stop motion animated series that this blog is named after was finally completed and shared with the world this year. My buddy Derek and I started working on it back in 2002. It was a very ambisious project for a couple of college kids, and life kind of got in the way. Derek completed editing the 8 episodes this summer that feature over 50 speaking characters. It was a ton of work. I'm happy with how the series turned out. Unfortunatly youtube has already shut down my favorite episode because we use copyrighted music in the show. Fell free to check out any of the post about it under the Action Figure Adventures (the series) tab.

At this point I've posted about more than 250 toys and other pieces of memorabilia in my collection. There is plenty more to go, so don't worry. I haven't even touched my GI Joes and Star Wars toys yet.

"My plan for this blog is to write (and maybe video blog) about Toys and other merchandise that ties into them. So, there may be some comic or cartoon material on here."

That's pretty much what I have done and plan on continuing to do. It's been fun getting back to animating. I really haven't done much stop motion work since college. My buddy Derek always edited our stuff and he was so backlogged with AFA I kind of got away from it. Now that I've messed around and figured out a way that works to edit the videos with what I have, I'm having a blast. I keep the animations short in my reviews to help me be able to complete them promplty, but also I just want to throw in a little enternaiment with the review. I don't want people to have to sit through 5 minutes of animation just to hear about a figure.

There are tons of toy reviewers out there. Many of them have fancier backdrops and cameras. I feel like the animation is something unique I can bring to the table and help make my reviews a little different. I hope to complete quite a few more animated reviews this year.

PS: I like to include a picture with posts as often as possible. These little mini-figs are little rubber knights. They come is a variety of styles and were easy to find in the early 90's. I don't really know much about them. 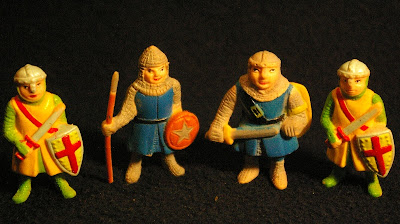