The vintage Metalhead figure was released as part of the 1989 line of Teenage Mutant Ninja Turtles. He was a cool character because he was a robot version of the turtles and featured vac-metal parts. Metalhead has one of the most detailed sculpts in the entire line of turtle figures. I had this guy as a kid and loved him. Eventually I sold my collection of turtles (all but a couple) in the mid 90's. I recently reacquired this guy in a collector's case of TMNT figures my Mom bought for me for $4 at a yard sale. 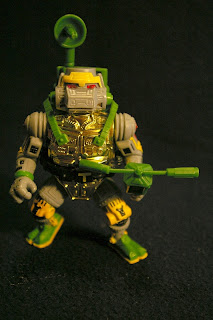 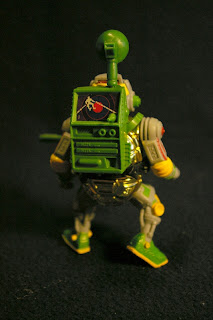 Metalhead came with a green gearbox weapon called the Radical Robo-chuks, Portable Party Pack, Radar/Foot Blaster  (green radar dish) and Utility Belt. You can also pop his arm off at the elbow and replace it with the Robo-chuks. As a kid I would sometimes plug the Robo-chucks into the hole on the backpack for the radar dish and pretend it was a helicopter backpack. Kind of like... Go, Go, Gadget Copter! 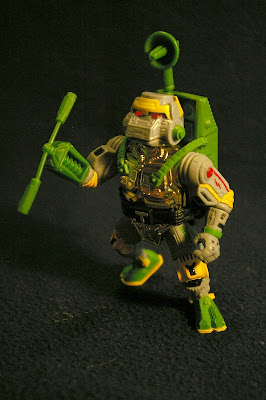 Metalhead also had a cool little feature that wasn't new, but hadn't been used a lot at the time. When light would shine through his translucent brains on top his head his eyes would light up. This is the same action feature that the Super Powers Darkseid had. Hasbro would later us this feature on several 90's Star Wars figures like the Jawas and R2-D2. 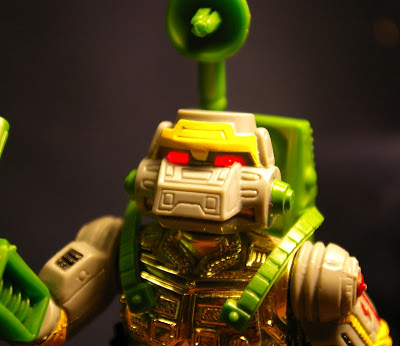