Today I wanted to do a little comparison of a Spider-Man 1 and Spider-Man 2 action figure. The first Spider-Man movie came out when I was a freshman in college, and it blew me away. I has so much fun watching that movie, naturally I bought a few of the action figures. I picked up Super-Poseable Spider-Man and ended up using him as a hero in my stop motion show Action Figure Adventures. He got so much use in the animation process that some of his joints got a little loose. When Spider-Man 2 came out I bought Super Articulated Spider-Man to replace him, but I didn't like the figure very much. 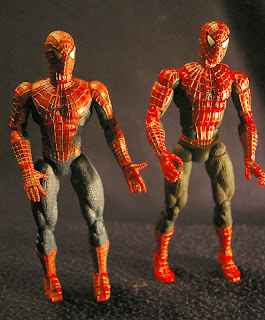 So we have Super-Poseable (Spidey 1) on the left and Super-Articulated (Spidey 2) on the right. They are very similar and both came with an obnoxiously large accessory that had a rope attached to it that they could be posed on or hung from. Spidey 1 came with a gargoyle head and Spidey 2 had a daily bugle billboard. From this photo you may be able to see that Spidey 2 has brighter colors and shinier plastic. The shiny red plastic always made this figure feel cheap to me.  He also has some extra articulation cuts most noticeably in the torso and shoulders. 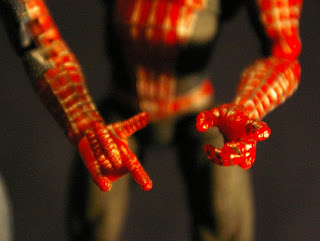 Super-Articulated (Spidey 2) does have better articulation. He has more joints and can be posed in more ways. The area that impresses me the most by this figure is that all of his fingers can move. Spidey 1 could only move his middle and ring finger to form the web shooting pose. Spidey 2 can do the web shooting pose or make a fist. 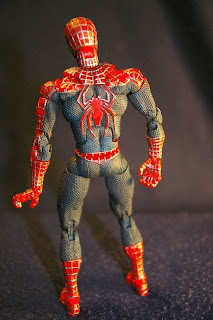 The reason I don't like the Super-Articulated (Spidey 2) is that he has the weirdest shoulder joints ever. I really don't like the way they look. From the back I find them very unsightly. I also found that these joints didn't stay the ways I posed them very well. I bought him to replace a toy with loose joints... so he needs tight joints.

If you want to see of clip of Super-Poseable Spider-Man in action check out this clip from AFA.
Posted by Buzz Chuck at 8:58 AM