I saw GI Joe: Retaliation on opening day and decided to post about it. I don't want to ruin it for anyone, so I'm going to focus on the freedies I picked up. I saw online that they were handing out specially packaged 3D glasses, so I took an old pair with me so I could keep these sealed. Not that they will ever be worth anything. Just a fun keep sake.

They were also giving out these posters in the lobby. The bad side features an advertisement to per-order the Blu-Ray at Walmart. The poster is printed in black, white, and gray with a few red highlights. The poster shows off most of the characters from the movie. 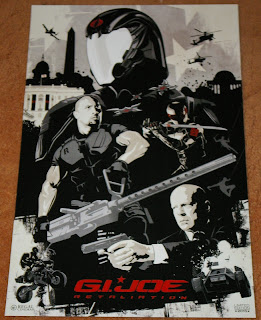 I won't spoil the movie, but I did enjoy it. I felt it was more true to the spirit and story of  the GI Joe comics. It's nice to have Cobra Commander look like Cobra Commander. The ninja battle on the mountain was very cool. I did find the 3D to be kind of annoying at times. There were a lot of scenes were part of the shot was blocked by someone's shoulder or a beam and it was weird having these objects feel so close to me. It really is a shame they wasted so many important characters in the first movie. I'm hoping for a third.
Posted by Buzz Chuck at 5:56 PM