The Star Wars Prequels introduced fan to lots of new Jedi, Aliens, and Droids. Today I'm taking a look at a couple of Astromech Droids released in the Episode III toy line.


R4-P17  helped Obi-wan Kenobi with his star fighter missions. This particular droid really makes his comment about not remembering ever owning a droid even stranger in Episode IV. R4 uses the same mold as pretty much all the Astromechs. He's painted up in a rusty red and white paint scheme. He has some gun metal details. I wanted to get this guy because Obi-wan is one of my favorite characters and R4 is a side kick to him of sorts. 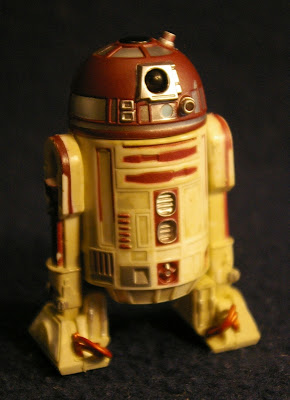 The Episode III R2-D2 came with many accessories. He has little clip on rocket boosters and a giant mechanical arm that can attach to his dome. The arm moves when you turn his head. I kind of hate the robotic arm, but the boosters are a nice accessory. He has a pretty standard blue and white paint scheme. R2 also has a little tan weathering at the bottom of the figure. 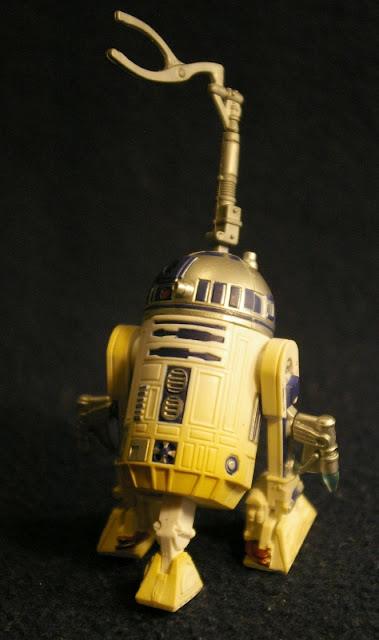 R4-M6 is a droid that never got any screen time yet he gets an action figure. After I bought Mace Windu's Jedi Fighter vehicle I decided to get his Astromech as well. I kind of wish that all droids with a round dome were R2 units and all the ones with the block tapered heads (R4-D4 from Ep IV) were R4 units. Maybe I missed it somewhere, but what is the difference between an R2 and R4 unit if it's not their head? 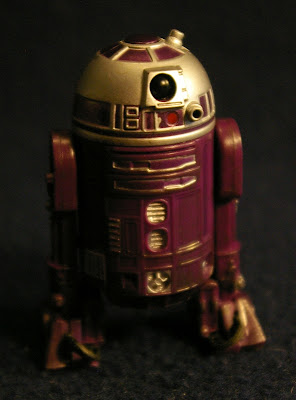 This last droid is a custom figure. I had an extra R2-D2 and decided to paint him up as an extra droid. I painted all the silver parts bronze and the blue parts green. He's got a "Fighting Irish" feel going on. I haven't named him. I'm not sure if he's an R2 or R4 unit. 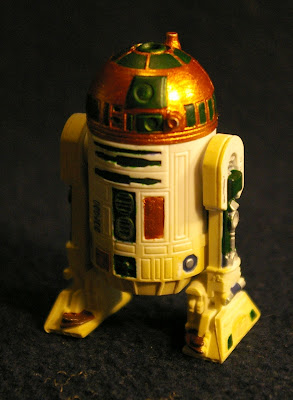