It's December... we need an icy treat.

For a long time I have been very close minded about what I call "Lego Knock Offs".  For many years I have been very anti Mega Blocks and Hasbro's Built-to-Rule toys (although I bought a few for the figures). Legos are the first and the best. As I stated, Hasbro chipped away at me a little when they came out with their own building toys that included GI Joe figures. The blocks still didn't hold together as well as Lego. Mega Blocks has been doing a lot of cool knights and monster figures for a while and then started doing licensed characters like Halo. Then Hasbro re-branded their blocks (not sure if they changed the design) and called them Kre-O. I bought a couple of Kre-O blind bag Transformers when I first got my lisence back. I bought four packs and ended up with two copies of two different characters. Kind of a let down, but the figures were cool. Then just recently I saw some Marvel Mega Blocks blind bags and Iceman was one of the characters. So, again I bought four. I ended up with three unique characters. Not as bad.

I had to try to get an Iceman, since he's my favorite X-Men character. Iceman is a clear figure who comes with a clear building brick base and a clear icicle weapon. He's a decent figure. I think he shares his sculpt with the Silver Surfer. He has a nice frosted look to him. These Mega Blocks figures have a nice amount of articulation. 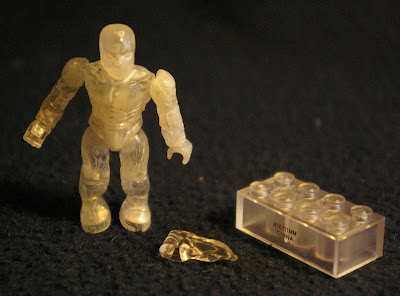 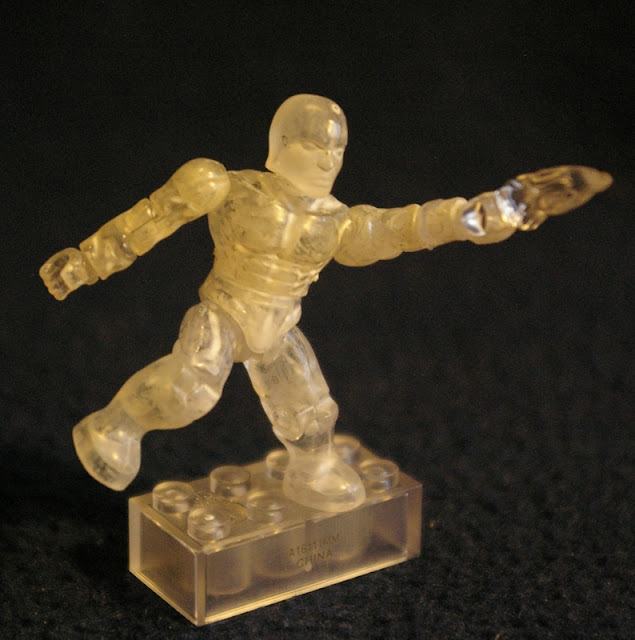 When I got my package from Action Figs & Things and there was a bunch of Mega Blocks guys in there I had to laugh. Up until a week ago I was still anti Mega Blocks. Iceman and those new figures from ActionFig are making me see the light.
Posted by Buzz Chuck at 11:27 PM