Treasures hidden in the basement

I have been helping my Dad clean up around my parents house off and on the past few months. He's been having a lot of work done to the house, and I think plans to downside in a few years when he retired. The other weekend we were cleaning stuff out of the basement. They are getting a new furnace installed for the heater and needed to clear a good path to take the old one out and bring the new one in. We were dragging stuff up from the the basement and then going through the boxes quickly in the back yard. Most of the stuff was junk that no one had looked at in years. One of these boxes has a few minor treasures form my childhood in it. This boxed contained some odds and end pamphlets and card backs from early 80's toys my sister and I owned. Unfortunately the box had gotten wet one time and the stuff in the bottom half of the box needed to be thrown out because it had gotten moldy. 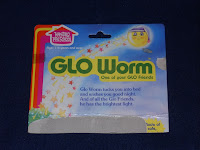 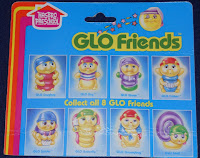 I have previously posted about Glo Friends here on AFA. In the box I found the top half of the card back to one of them. It shows off all the figures in the first wave of the line. 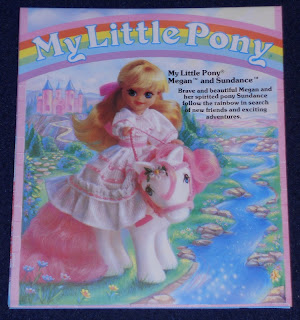 The box also contained several pieces of My Little Pony paperwork. These might have come with my sister's Pony Castle. She sold the Castle at a flea market when we were kids after she stopped playing with toys. Later I traded the box to it (which was in our attic) to a toy reseller for some store credit. His wife collected My Little Pony. 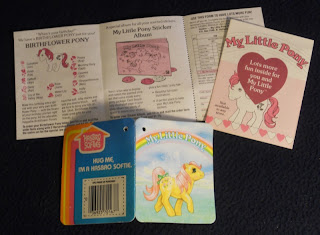 I have also posted about the Care Bear figures my sister and I had in the 80's. I think this little booklet came with the Cloud Mobile my sister got for her birthday one year. The booklet shows off all the figures. My little niece plays with our old Care Bears now. 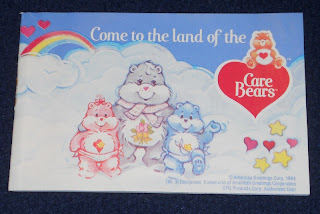 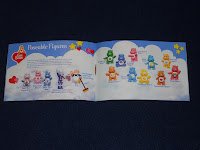 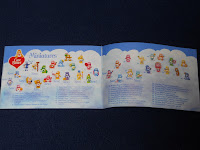 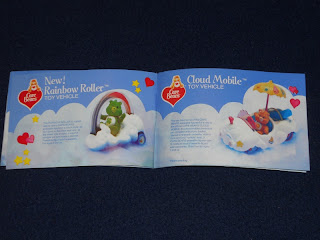 Instructions on how to diaper your My Little Pony baby. 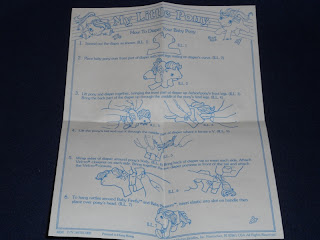 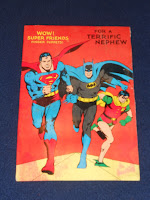 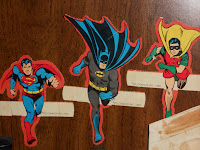 In a piece I re-posted here about Superman, from an older site I wrote for, I talked about a birthday card that contained little punch out finger puppets. I found the front of the card. It looks like it came from one of my aunts and uncles. I got this card when I was very young. I've had the finger puppets for years. I thought the card might have the Super Powers logo on it, but it doesn't. 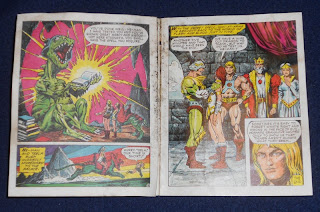 I had to throw out this He-Man and the Masters of the Universe mini-comic. You can see the mold in the fold. The Dragon's Gift was also made into an epsiode of the Filmation cartoon with a red version of the Dragon Granamyr. I'm looking forward to the MOTUC release of him this month. 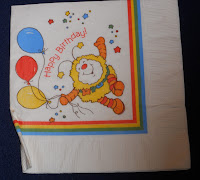 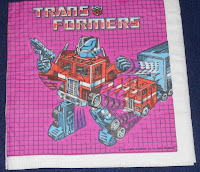 Napkins from my Sister's Rainbow Brite Party and my Transformers Party. I was never a huge fan of this piece of artwork of Optimus Prime. It's just an odd rendering of him. 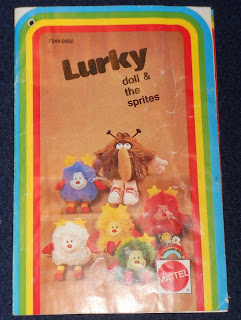 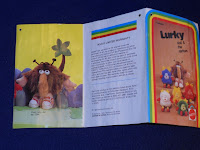 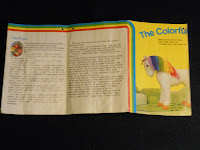 Here is the booklet that came with my Lurky doll from Rainbow Brite. I have to admit it, I love Rainbow Brite. It was a cool cartoon show and I had a several of the dolls. The bad guys were my favorite part though. My mom could not understand why I wanted this ugly doll as a kid. 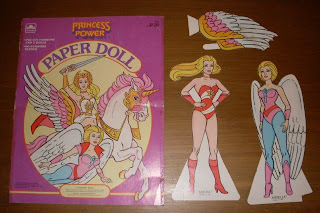 The last item in the box, which was totally ruined from the box getting wet was a set of She-Ra paper dolls. (I stole the above image from an ebay auction to show you them) The paper from the dolls, costumes, and booklet were all stuck together and moldy so I didn't bring them home to photograph. I remember my sister getting these on the board walk at the beach one summer. The set included She-Ra, Swift Wind, and Angella. They all had their normal outfits and a bunch of weird ones they never wore as toys or in the cartoon. As a big MOTU fan I was a little sad to have throw them and the He-Man mini-comic away.
Posted by Buzz Chuck at 2:33 PM