James Eatock (aka Bustatoons)  is perhaps the most knowledgeable He-Man fan when it comes to the Filmation cartoon show. Right before I started the Action Figure Adventures blog, his The He-Man and She-Ra Blog was one of a handful of blogs I was reading on an almost daily basis. James' blog is one of the only ones of that group that is still being actively updated.

A while ago James held a comment contest where visitors to his blog got points for each meaningful comment left on a post (there were rules to define meaningful). When it was all said and done I had earned enough points to receive a free Filmation Cel. That cel just arrived today from England as a little Christmas Eve present. 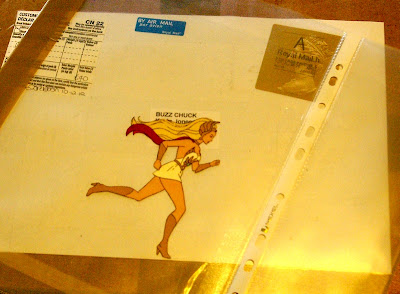 This cel is from a She-Ra run cycle. There would have been dozens of other similar cels with her arms and legs in different positions. Then when photographed in order She-Ra would appear to run. In an action show like She-Ra we would see these stock running sequences used frequently. I find it interesting that this cel has no hand written markings at the top or bottom. Most of the Filmation Cels I own have marking to indicate the show or episode they were used in. Some just say stock because they are sequences that are reused. 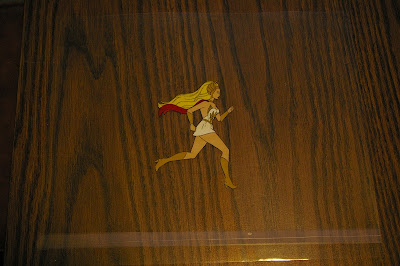 Here is a close-up of  She-Ra from the cel. 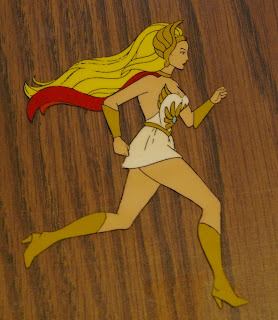 Thank you very much James! If anyone is into He-Man and She-Ra you should check out his blog. He post mostly about the Cartoon, UK Comics, and some of the story books from back in the day.