Anyone who is a fan of the Vintage 80's GI Joes knows about the Tan versions of Grunt and Clutch. I always wanted a set of the original Joes in tan. They even released some of the vintage weapons in tan as part of a weapons pack. They didn't make enough characters in tan costumes to easily make customs of the rest.. 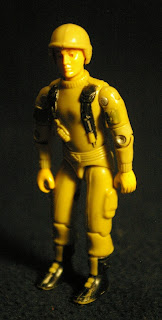 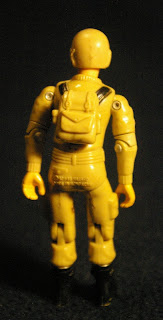 Tan  Hawk is an easy custom figure to make. He's a Hawk head on a Grunt body.
I've given him a weapon pack back back as an accessory.

Breaker is another original character that is easy to make a tan version of due to all the part reuse in the first two years of the line. You need a Breaker Head, Tan Clutch Arms Legs, and Tan Grunt Torso. I've been sitting on a spare Tan Clutch for along time waiting for a second Tan Grunt. I eventually made the figure below. 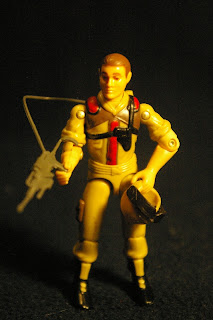 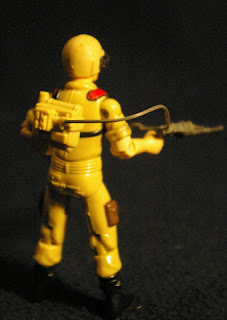 Tan Flash is just a Flash Head on a Clutch Body. This is not accurate at all the the Green Flash, but their are no Hasbro made Tan padded chests and space boots. I painted a few brown details on his legs and painted part of his torso red in homage to his normal green padded self. He has a weapon pack laser and tan backpack. I even gave him a tinted visor since the tan figures are sort of desert themes I though he might need shades. 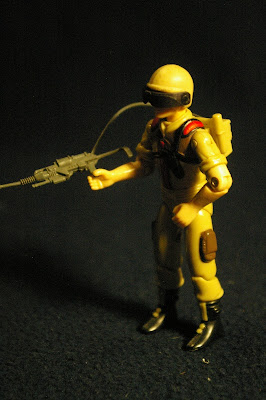 If I get another Tan Clutch I will swap parts around between Flash and the Grunt figure to give Flash long sleeves and free up the parts to make Tan Breaker. Most of the other original figures would require a lot of painting on green parts to make them into tan Joes. Stalker could be done with minimal painting, and Snake-Eyes could be done somewhat close to his original form. The main parts that where not made in Tan are Flash/GrandSlam/Snake-Eyes Boots, Zap/Shortfuse Torso, and Rock&Roll Torso.
Posted by Buzz Chuck at 1:42 PM