Today I'm posting the second half of my custom GI Joe sub-team I created years ago. These figures are part of an elite strike force called Desert Assault Squad (DAS). 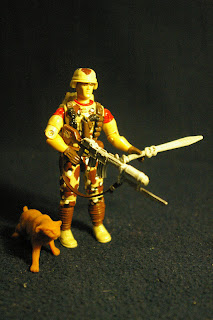 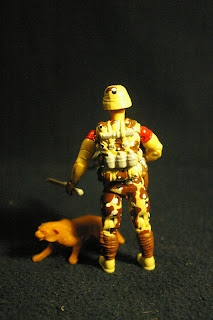 Spearhead & Max - As a kid I always loved the figures that came with pets and Spearhead was no exception. This custom figure is Spearhead's head on a Duke body with all of Spearhead's accessories except the helmet. Spearhead's actual helmet never fit as nicely as I like, but the Duke helmet standard to most of the DAS figures fits well. His backpack and gun feature some painted details. 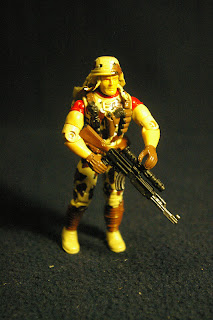 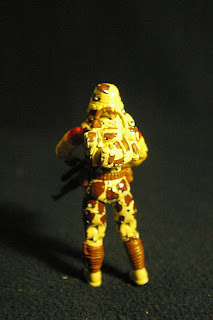 Oasis - is the second new character I created for the team and is a survival expert. He is a Deep Six v2 head on a Duke body. His head was a little to small for the helmet so it was glued on. I used some sculpty to add a cloth  piece that hangs off the back of the helmet like Dusty's. He has a custom painted Big Brawler gun and a weapon pack Recondo backpack. 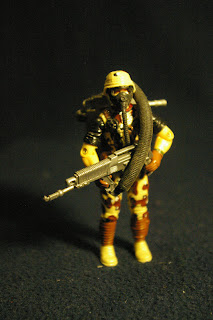 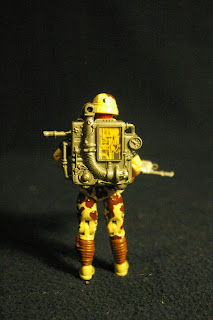 Charboil - Another who like Spearhead only had one version in the actual line. I figures a flamethrower trooper would be able to handle the heat of the desert, so Charboil earned a spot on DAS. He is made using a Charboil head, Flint arms, and Duke torso & legs. He is equiped with a Duke helmet with a Rip Cord gas mask attached (I carefully cut out the plastic visor so you can see though the mask). and Chariboil's backpack, flamethrower, and hose. 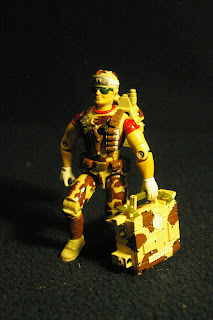 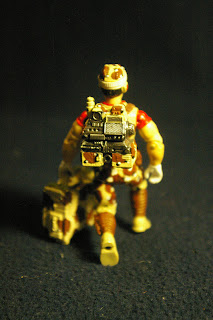 Lifeline - As a kid I always though Tiger Force was supposed to be a Desert team, and so I included several Tiger Force member on DAS. Duke, Dusty, and Lifeline are featured on both sub-teams. Just like a communications specialist, every team needs a medic. This figure is a Lifeline v1 head on the Duke body. He has a custom painted Lifeline backpack and med-kit. I painted his gloves white like latex gloves.

As with many of my custom figures parts left over from one figure end up in the next custom. Spearhead's entire figure was used in this team. Big Brawler's accessories were sprinkled over two different figures. The extra Duke heads show up in some of my other custom toys like the Derek figure used in Animation Creation: the series. There are post of those figures on here already. If you keep reading, I will eventually post more custom figures. Don't be surprised if a few of them have Duke heads also. I really like this Duke head. He has nice features and a good looking haircut.
Posted by Buzz Chuck at 10:30 PM