Sword Slicin' Leonardo is part of a "Wacky Action" line of Teenage Mutant Ninja Turtles. These turtles came out after the standard versions of the characters had been sold for a while. The Wacky Action toys features wind-up actions and allowed Playmates to sell fans new versions of the main characters. Just like how toy lines always create multiple versions of the heroes like Batman, He-Man, and Snake-Eyes. 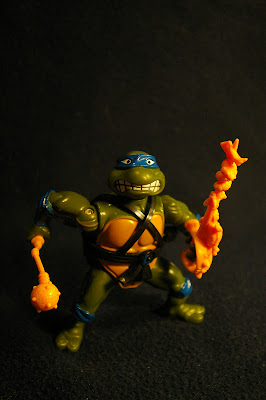 I was lucky enough to own all four original turtles as a kid, although it took some time and hunting. When the wacky action toys came out I had mixed feelings. Some of them seemed cool, while others didn't apeal to me. I do not recall asking for this Leo, but I did own him. I probably got him as a present from someone (because I didn't buy him or put him on a wish list for my parents). Like almost all of my vintage turtles he was sold at a yard sale in a sandwich bag with his file card and weapons for a $1.50. At the time I was focusing on other toy lines and all the money went back into buying stuff I wanted at yard sales. 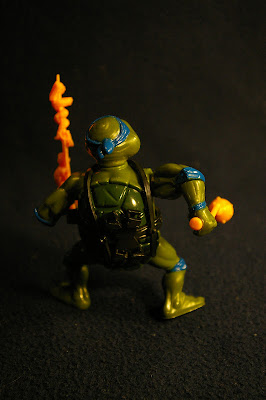 My Mom recently called me from a yard sale asking if I wanted a case with Ninja Turtles in it for $5. She said they were original Turtles from '87. I assume this is what the guy selling the stuff told her because she knows toys in general, but not what versions of toys she is looking at. So I said yes. She talked the guy down to $4 and bought me the toys. She told me it has all four original Turtles (she knows toys enough to know you need four different colored Turtles). I was disappointed that they were actually Wacky Action Turtles, but I told her she did good anyway because I would have paid $5 for just the case.

Leo is missing his whip accessory, but has his sword and mace. One thing I did like about the Wacky Action Turtles was that their belts were made from the molds for the original versions and could carry those standard weapons. I often equipped the Wacky Turtles with their standard weapons. The Wacky Turtles also featured new head sculpts. Some of them I liked more than the original heads. They had a little bit more of the cartoon vibe to them.