I try to vary my posts and not put the same kind of stuff up two days in a row, but I broke this post into two so it didn't get so long. More custom figures I made over the years. 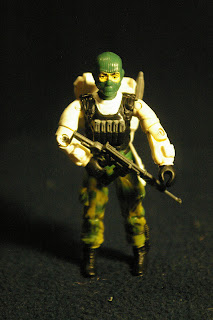 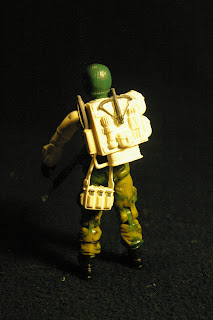 Arctic Beach Head
This is a Beach Head v1 Head and Torso, Frostbite arms, and Big Brawler legs. His shirt under the vest was painted white to match his sleeves. His gloves were also painted black to help match his normal uniform more. I have found that Beach Head v1 usually have broken waist, so I replaced his legs with another set of camo pants. His weapons are all weapon pack versions of Beach Head v1's weapons painted up white with gray details. 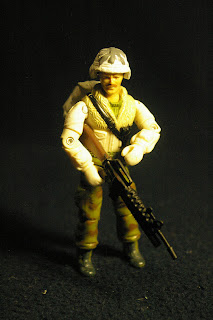 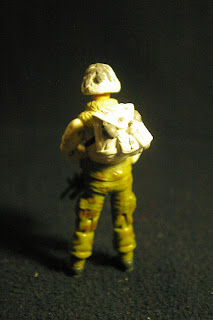 Arctic Footloose
This is a Footloose v1 head and legs on a Frostbite v1 torso and arms. He is armed with repainted weapon pack weapons from Footloose and Leatherneck. The Leatherneck gun is painted black with a brown stock. The Footloose backpack and helmet are painted white with gray details. 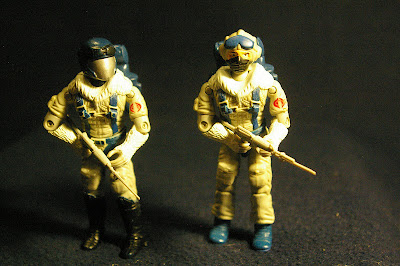 Arctic Cobra Viper and Snow Serpent
I always like the Vipers in snow suits from GI Joe: The Movie and tried to create that look as a kid.I put the head and boots from a viper on a Snow Serpent body. In the movie their snow suits are navy blue, but that would involve a lot of painting. The Snow Serpent was a yard sale find and has some yellowed. I decided to paint the top part of his mask to look like an exposed face. Some artwork for this figure depicts the character with part of his face showing. This also gives the goggles on top his head some purpose.
Posted by Buzz Chuck at 4:06 PM