I rarely photograph toys outside. I love the way he photos look, but I'm always worried about loosing their accessories. While take pictures after a recent snow my worst fears were realized. Below is a photo of three different versions of Hoth Luke. Going Left to Right, we have the PotF2 Luke, Vintage, and then the 2000's Modern figure. 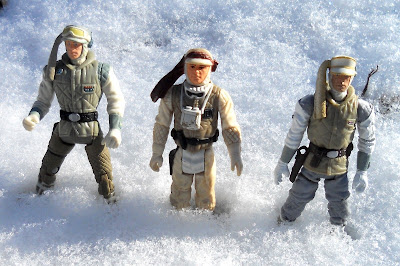 The modern style Luke is articulated so that he can be positions to recreate his time suspended from the ceiling in the Wampa Cave. He has an odd articulation point in his neck and a pivoting scarf attached to his hat. While posing him to take a photo that showed off this feature the scarf fell off. I was photographing these toys on a snow covered pile of wood chips. Looking for a tan piece of plastic on a wood chip pile is like a needle in a hay stack. Maybe it will turn up, but I doubt it. 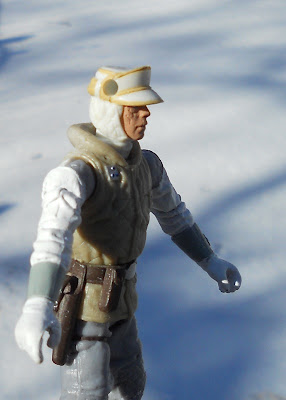 This figure is actually the 2nd release of this toy. He was first released with a icy diorama base that suspended him upside down. For this release his face still has many scares sculpted into it, but he doesn't have the bloody paint scheme of the other release. 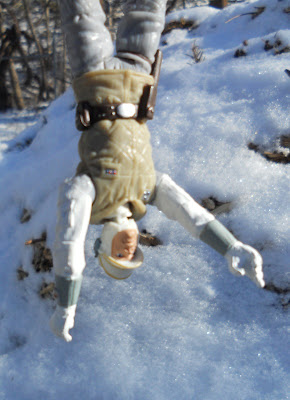 As far as I know Hasbro has yet to release a "perfect" version of Luke Skywalker in Hoth Battle Gear. Perhaps we will get a Vintage Collection version at some point. This "modern" Luke isn't so new and current anymore.
Posted by Buzz Chuck at 4:32 AM