Two Bad always stood out among all the other strange MOTU characters as one of the weirdest to me. He's like a conjoined twin from two different races. Two Bad came with a small yellow shield that could be clipped to either of his writs. There are two different variations of the figure. Pictured below is the "flat" back version. The other figure has a more rounded back. Two Bad's action feature is involved his two arms. They are connected internally, when you pull one back they both open up and when you let go they slam shut in a pounding action. 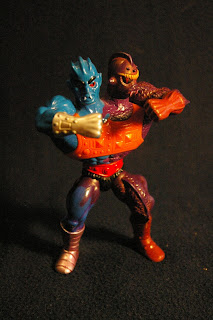 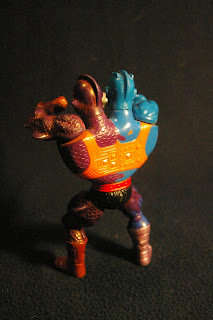 I never had Two Bad as a kid, but my cousin Eddy had him and I used to enjoy playing with the toy at his house. I'd love to see a custom version of the vintage figure with more traditional shoulders and arms. I kind of hope when they makes the MOTU Classics version of the character has standard shoulders.