I just received this retro Robin figure yesterday in a package of toys from the Cosmic Arc. I wanted to post about him right away. As a kid I had the Super Powers Robin and loved him. I don't actually know what happened to that figure, but I'm happy to have this almost identical replacement. 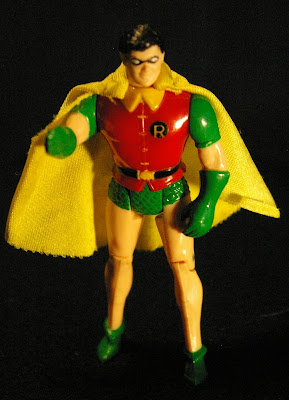 After the release of the 1989 Batman movie Toy Biz put out a line of toys that were based on old Kenner figures from the Super Powers line. The only real difference between this figure and the older version is that he has a lever on his back to activate his karate chop action instead of squeezing his legs. 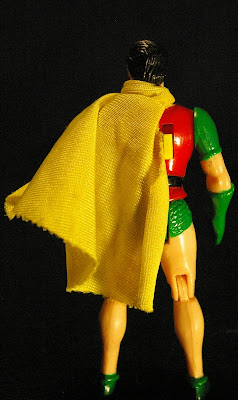 As a kid I used to like to put his cape on the Cobra-La Royal Guard from GI Joe. If you've seen the animated Joe movie you may remember that they wore green capes not included with their action figures.
Posted by Buzz Chuck at 11:38 PM