As previously mentioned I was out in Pittsburgh at the end of the week for a work conference. I was excited about making the trip because it would give me a chance to visit the Toonseum again. I have always been a big fan of all forms of animation, but the Toonseum is responsible for my obsession with collecting animation cels. I had a few before my first visit, and I even donated a few to their collection that visit. Then seeing some of their awesome collection inspired me to collect more. I've collected more cels than I can easily display. I hate "hoarding" collections and not being able to share them. I love having my collections out on shelves or in display cases so they can be enjoyed.

After finding out I was taking a friend's spot at the conference I went though the extra cels in my collection and put together a sizable stack to donate to the Toonseum. This time I planned to donate cels from He-Man, She-Ra, Brave Starr, Mighty Mouse, Filmation & Real Ghostbusters, Droids, and a commercial for Trix cereal. 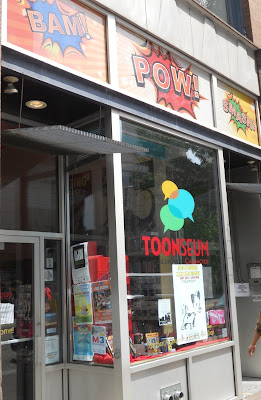 When we had a free moment from the conference I convinced my colleague to take a cab with me to the museum. He was rather reluctant... he's not as much of a nerd as I am. When we got there I was surprised to find the sign below hanging in the window and the door locked. 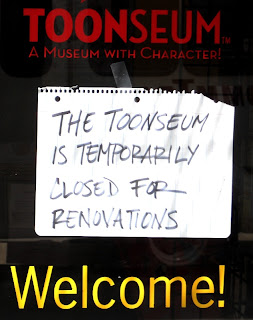 They were changing over exhibits and were closed. We stood outside for a moment, and luckily and employee opened the door to ask me if she could help me. I said that I was hoping to see Joe because I had art to donate. A moment later we were able to go in a see Joe Wos,  Executive Director of the Toonseum. Joe  greeted us and was very excited to see the cels. He mentioned that the He-Man cels would be helpful for an exhibit they are working on putting together. Despite being in a state of transition we were able to look around. I get to see part of the Akira exhibit, I thought I wouldn't get a chance to see it because I didn't think I was going to make it to Pittsburgh during the time period the exhibit was open.

Pittsburgh was fun and I hope to get back again soon.
Posted by Buzz Chuck at 9:31 PM