General Traag is the leader of Krang's Rock Soldier Army. His action figure was one of my favorite villain figures I had as a kid. He's a large bulky figure covered in rocky textures and little creatures hidden in his sculpt. He has snakes and spiders sculpted onto his body, even some spider webs. Some of them aren't even painted. 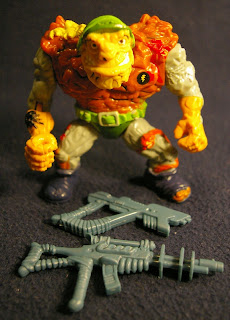 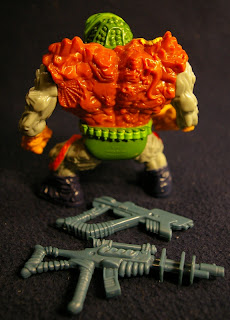 Traag wears a green helmet, green trunks, and a belt. He came with three accessories. The General came with a blaster, a large laser rifle, and a knife (not pictured). I forgot how hard it was to put weapons in his hands. The plastic used for this figure is super hard. His hand sculpt is very tight. This makes it difficult to slip the handles into his action grip. My original Traag was sold years ago, but not to long ago my Mom picked up a hand full of turtles for me at a yard sale. I know this is going to sound weird, but I always liked the fact that Traag had has a hinge joint in his one elbow. This was a type of articulation rarely seen in the Turtles line. 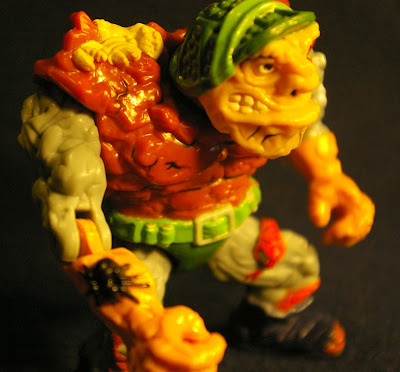