I spent a lot of time this weekend going through my animation cel collection. I have a pretty large collection of production cels from various cartoons, but mostly He-Man and the Masters of the Universe. A good friend of mine from work got sick (nothing major) and so I'm taking his spot at a conference at the end of the week in Pittsburgh, PA. While I'm out there I plan on visiting and donating more art work to the comic and cartoon museum, the Toonseum.

This image of He-Man is actually made up of three cels. He-Man's body, his lower face, and his left hand. It's interesting to see how they can save time and money by only redrawing his facial expression.

This cel is from episode MU 91 "Jacob and the Widgets". In this episode He-Man battles robotic sea serpents and saves a valuable crystal hidden in the Widgets caves from Merman. The caves were flooded by Merman and if He-Man can't stop the water the Widgets fort will be destroyed. 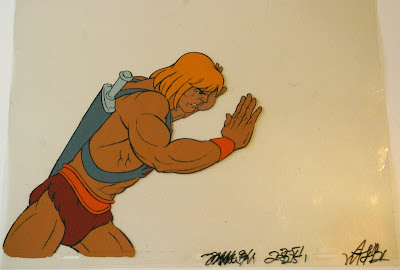 To reverse the rising water in the Widget's fort He-Man flies a special Windraider to the Moon and pushes it to reverse the tide. Conveniently Man-At-Arms built a Windraider with rocket boosters earlier in the episode. Below is a screen capture of He-Man moving the moon. 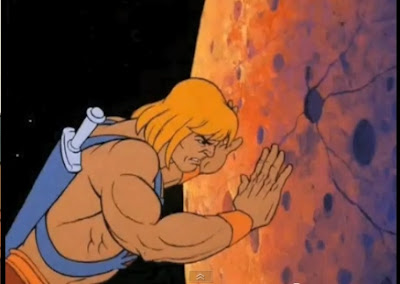 Below you can see just the top cel that shows He-Man's eyes and nose don't change. His mouth and chin are redrawn several times to create the shot. 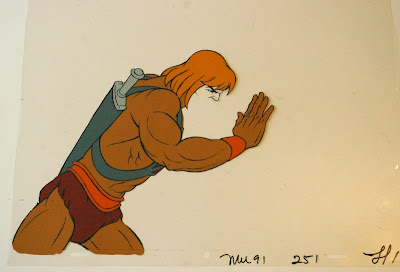