Roadblock is one of the earliest instances of a GI Joe duplicating military specialties with another member of the team. Roadblock  is a Heavy Machine Gunner, which was originally Rock 'n' Roll's job has the teams Machine Gunner. I always enjoyed Roadblock on the cartoon, and loved his v2 figure. I just never really got into this version as a kid. I'm not a big fan of the pants that almost match his skin tone and I couldn't figure out what was going on with his shirt. I now know he is wearing a camo "wife beater" with a harness over it, but as a kid I couldn't figure out the sculpt and thought it was a really strange shirt with no sleeves and no visible shoulder fabric. I just thought it looked weird. Like Gung Ho, the original Roadblock also seemed too skinny compared to the way he appeared in the comics and cartoons. 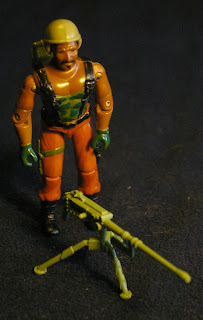 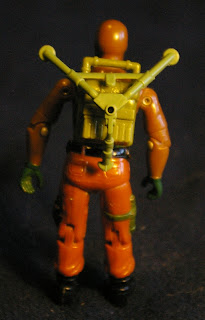 Roadblock was one of the last figures to come with the standard helmet (it's light green like the gun... kind of looks tan in the photos). He also came with a really awesome .50 cal machine gun with a tripod. In addition he also came with a brown backpack with a removable ammo box. (The tan backpack pictured is from a weapons pack) His tripod could be attached to his backpack for when he carries the gun. 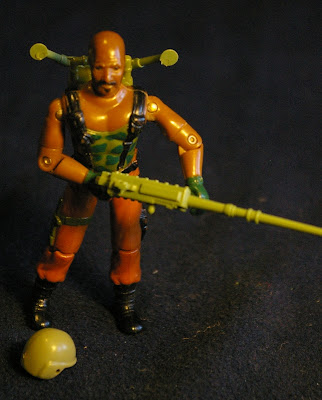 I appreciate this figure a lot more today than I did as a kid.  The Tiger Force version shares this mold and was very popular with several of my friends growing up.