So I'm behind on my comic reading, but Batman Annual #1 is from July 2012 so there may still be a chance to pick it up. I prefer reading comics in collections, like trade paperbacks. For a while the only DC stuff I was reading was older graphic novels and trades. I did jump on JSA when they were going to do a big new story arc that features Alex Ross covers. I was interested in this story because a personal friend of mine, comic book author, Doug Moench had written a JSA story and DC was pulling the plug on it because of major changes to Star Man and JSA that were happening in regular issues of the comics. It bumped Doug's story out of cannon. Doug had other issues like this with Batman stories in the past few years, due to the death of Bruce Wayne. When that arc was over I stopped reading any monthly DC books until I heard about the New 52. I told the owner of my local comic book shop I wanted the first 5 of all 52. Then I'd figure out which ones I wanted to continue with. I ended up making the decision without ever reading all those issues. I couldn't read 260 comics in 5 months. I read all five of some, one or two of others, and none of some of them.

Anyway, back to the point. I kept getting most of the Bat books and that's about it from the new 52. I guess DC's plan worked on me to some degree. I went from zero monthly books to 52 and settled in on eight. I'm not real big on how they are connecting all the stories with the Night of Owls thing. It's a good story, but I thought DC said no more multi-book story lines? At the end of this Bat-family adventures comes Batman Annual #1. 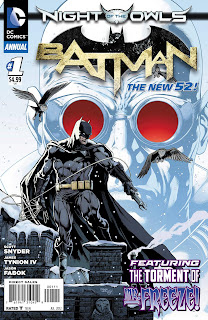 This gives Mr. Freeze his origin story for the New 52. It's kind of neat that he's already been in a issue, and we all know his story. If you know his background from the pre-New 52, or the BtAS or Batman & Robin, it's all sort of the same... isn't it?

Scott Snyder gives Mr. Freeze an even more dark and twisted back story. I actually started out not liking the story. There is a strong connection between Victor Fries and Bruce Wayne. I'm not a huge fan of Bruce Wayne/Batman creating his own villains. It's a cool story idea, but I don't really like it for Batman. I also am not a huge fan of him having bare arms. I prefer a more self contained suit.

Once I got past that and read more, close to the end, Mr. Freeze's motives (which we all know he's motivated by his love for his wife Nora) become twisted and extra creepy. There is a flashback even after this to a young Victor and his mother that really seals the deal that this guy is one sick bastard. If you haven't read it, hunt this issue down and read it. This is my first glowing endorsement for anything from the New 52. I'm saying this as I am considering dropping a couple more of the 8 books I'm still reading. Scott Snyder's gonna hang onto this reader for a while longer at least.
Posted by Buzz Chuck at 12:18 PM