Of all the DC Comics characters Jonah is one of the last figures I would have ever expected to own. I just don't care for western comics. I'm not even a huge fan of western movies, although I've seen a lot more of them than I've read western comics. I still haven't read the first five issues of the New 52 All-Star Western I bought months ago when I got the first five issues of each of the New 52. I didn't see the Jonah Hex movie and I see just about all the comic book movies. 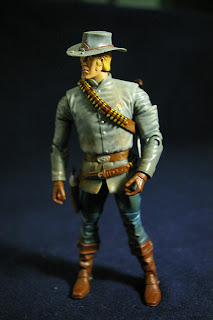 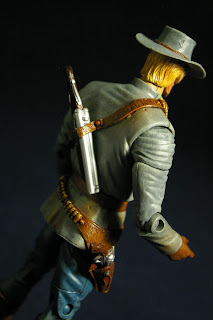 Anyway, Jonah Hex was part of the DC Universe wave that I needed a complete set of to build the Collect and Connect Bane. He's a nice figure. Good articulation and nice paint apps which make him look dusty. He comes with two guns, One can be holsters on his hip and the other gets slung over his back. 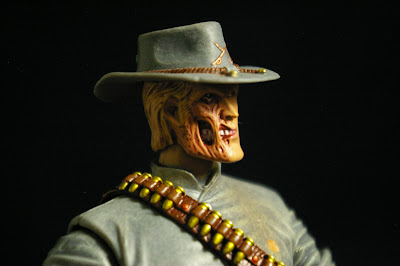 They did a nice job with the sculpting details on the scared side of his face. It's very gross and nasty.  From what I read about  the character he was branded with "The Mark of the Demon" by an Indian tribe he was an honorary member of and then angered. Did the branding go wrong? I don't see a "Mark", I see an f*ed up face. 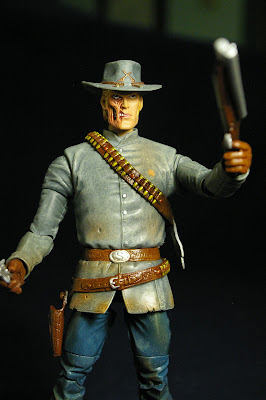 To date, I think the only book I've ever read that included Jonah is Crisis on Infinite Earths. I read online that after his death his body was taxidermied and he was part of a traveling show. How bizarre and disturbing. I'm not a fan of dead bodies. 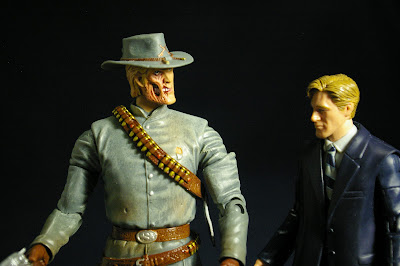 Jonah Hex: Trust me your gonna need a good one.
Posted by Buzz Chuck at 6:09 PM