It's Friday and I'm waiting to see the new He-Man figures that are going to be revealed in less than an hour at SDCC. While I am waiting I figured I better get this weeks instalment of Easter Eggs and Notes written up. So here a few things to look for or think about on a second viewing of 6th Episode of Action Figure Adventures.


2:11 "The other place"... finally there is a connection between the dorm room and the place where the toys are dumped in the opening of the show

2:52 The Giant really hasn't been involved in the show at all since he brought Robin into the room and opened him up. (He gets a bit of screen time in this one) Because I (myself) was a character in the show I told Derek I didn't really want to be a voice in the show. I though it might be weird (at least for people that know me). I did end up being one of the Tiger Force Flunkies, but they have a small part and I disguised my voice somewhat.

3:55 We watched a little bit of the Big Easy before making Brian voice Gambit.

7:26 Derek remixed the Adult version of Robot Parade by They Might be Giants for the Episode

8:50 When Craig provided the voice of the Robot God he used the "In a World" announcer guy voice. Derek later added the electronic echo effect.

8:54 The return of the Cloner. She was the first character that Chuckles met in the ceiling. Her backpack is actually for Luke Skywalker to carry Yoda during his jedi training. 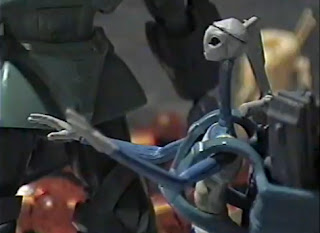 9:22 Derek agonized over the sound of Chuckles kicking the Robot God. How do you make a sound for two plastic toys hitting each other, but still make it sound hard?

9:47 Outback's voice was one of the last ones we recorded for the show, and held up production. According to his GI Joe bio he is from Wyoming but how could we pass up having the guy named Outback be an Aussie? We has a lot of trouble finding an Australian in the US to do the voice for us. We were lucky to get James to do his best impression. James owns my local comic book shop, Cyborg 1.

9:54 I used that Star Wars backpack for a couple years in college until it fell apart. My roomate always refered to it as "The Backpack of Justic". I had one Proffessor who would always say "Grow up man! You're going to be a teacher. One of the other Proffessors in the same department (who I worked for) always said he loved it because he could pick my backpack out in a pile of
bags. So he'd know if I were in the building. 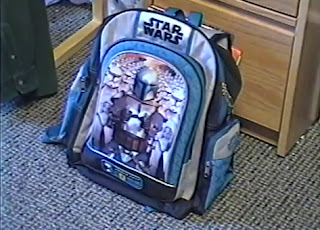 10:44 Outback's hat isn't really his. Derek wanted him to leave something behind in the backpack as a sign. I thought it would be weird to have him leave his backpack in the backpack so I gave him a Crocodile Dundee hat that belongs to a GI Joe bad guy. 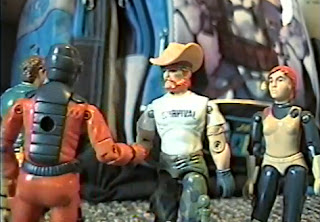 11:25 In case you never noticed before... this shot makes it obvious that the 1982 straight arm Scarlett figure used in the show has a broken waist piece. You can easily see the metal t-hook that attaches her legs to the rubber band inside the figure.

13:18 I bought the "Robot God" at a store called Quakerhead on South Street in Philadelphia. At one point in time I had planned to do animations using a bunch of Gundam robots as the armored costumes for a group of vigilantes. That didn't go anywhere beyond some early idea. The toy was used in the Too Many Robots episode of our show Animation Creation. He actually fell while animating that show and and his hip broke. It made him little harder to animate for this series since he really only has one leg.

13:27 The Robot God doesn't seem to mind damaging his disciples while he tries to eliminate Chuckles.

17:21 Derek hates it when I put my room mate Mary Kate and Ashley Olsen poster in the shots. 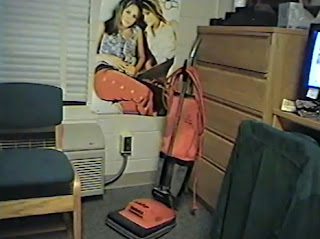 18:23 The memorial has gotten pretty big over last 6 Episodes and doesn't show all the character who have meet their end. 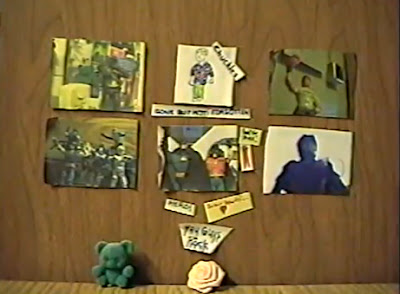