This is the 7th Friday in a row that I am posting Notes and Easter Eggs about our stop motion animated show. I hope if you've been watching you like it, and if you haven't see the show check it out. Here are some things to look for in a second viewing of AFA Ep 7.

SlooooWWWWW Mmooooooooo opening! - I'm going to comment on the toys dumped during the open. since they get the most screen time here.

0:23 - The first box is random toys where I didn't have many figures from one line. (Modulok from MOTU, Z-Bots, Dungeons & Dragons, Mad Balls, and Pirates of Dark Water)

0:33 Box two contains mostly COPS 'n' Crooks toys but there are some Police Academy guys in there also.

There are Real and Filmation Ghostbusters, Vintage and New Sculpt GI Joes, and lots of 90's PotF2 Star Wars figures.

0:47 - The Title Card for Clutch and the Tiger Force Flunkies has a mistake. Clutch is labeled as Chuckles. Our typographer has been fired. (All mistakes in this blog posting will also be retroactively blamed on her)

1:14 - We get to the Darth Vader case of vintage figures. I did not dump my C-3PO case which at the time stored my more valuable Star Wars figures.

2:08 - Sgt Slaughter is voiced by a fellow high school teacher who has one of the most booming voices I've ever heard. 3:06 - The Millersville cup in the background was from a free refill promotion they ran at  an on-campus convenience store. I forget how much my roommate and I each paid for the cups, but we drank our money's worth of soda that semester.

3:10 - When I picked out what toys that were going to be in the show, we did not  have a complete script yet. Several toys including Footloose, Outback, Lady Jay, and the rebel pilots were included basically as extras. I wanted there to be a lot of toys at the beginning of episode one and in the big battle. I had hoped that it would be noticeable how the numbers quickly dwindled though out the show. Derek chose some of these characters to have bigger roles. Some of the X-Wing pilots disappeared after the first episode along with the Star Wars battle droids. I wanted it to seem like some of the toys may have been lost in the fight.

4:55 - Mr. T. Loot Bag - I don't know if this was saved from a party I had or if I brought it home from someone Else's party. It floated around our house for decades. I always liked that his dog had a Mohawk in the cartoon show.

5:33 - The concert. Derek explained in the script the major plot points of this adventure and gave me the three songs. Which toys where used and how they interacted was something I decided.

5:43 - Derek and I always loved the Max Rebo Band from Star Wars. As a kid I had a set with no accessories (even Sy Snoodle was missing her skirt and feather) Derek was in the same boat except his Sy was better off. In college I bought another set of the band that included Max's Organ, Droopy's Clarinet, and Sy's Feather and Skirt. I also picked up an organ that has a broken key for Derek. We used all three sets of the band here.

5:53 - General Lando Calrissian was the most recent addition to my vintage collection (at the point in time I animated this) so he got a little bit of a close-up. My friend, Greg, gave him to me for my birthday. 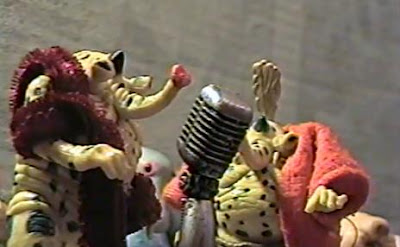 6:04 - I don't have either of the two microphones that come with the band set, so the old fashion looking mic came with a Muppet's Tonight figure Brian gave me. It's so out of scale to these toys that I built the cardboard stage to make the microphone the correct height One Sy is wearing a scarf that came with an X-Men Movie Rouge figure and the other is wearing a jacket from a Disney Cinderalla mouse McDonald's toy

7:16 You can see Buddo (GI Joe Samurai) has removed his "silly hat" as instructed by Sgt. Slaughter.

9:00 This one of the widest shots of the Heroes base. You can see a He-Man & the MOTU poster, a KISS t-shirt, and a Simpsons calendar.

10:00 The concert crowd is made up of all of the vintage Star Wars toys I owned at the time except Squid Face who was used ealier in the series. Here you can see the custom GI Joe figures of Derek and Kevin (myself) from our show Animation Creation. We get a little cameo. The only other no-vintage Star Wars toys in the crowd is the Alien Prisnor that Chuckles freed in the first episode. He is sitting in the front row not far from Chuckles. He's a 2000's era Star Wars toy. 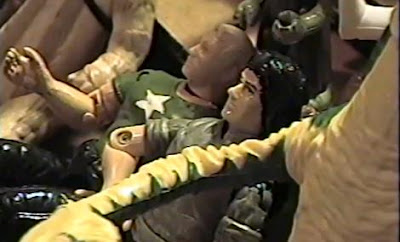 11:43 Along with training the Heroes Sgt Slaughter tried out a few escape plans of his own, but never risks his own life. "The Juggernaut" was made from two small Pringles cans for wheels, a Poptarts box, and plastic silverware 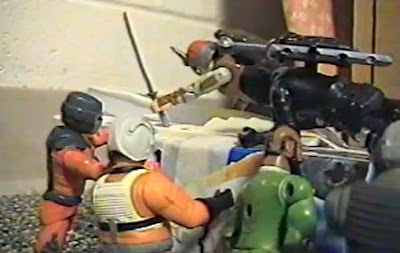 13:11 Sgt Slaughter was one of my favorite GI Joes as a kid. He was actually hard to animate with because that figures joints are really loose from being played with so much as a kid. It kind of shocked me at first how mean and evil Derek wrote the character. With Drew's vocals added to the animation I really liked the finished product and it cracks me up. He's like an enemy within their own ranks.

13:40 For the third song in the concert the only non-Rebo Band member get to sing. This is a Cantina Band member that was a mail-away figure in the late 90's. Later they reused the mold and put out a set that had 5 or 6 of them so you could have the entire Cantina band.

14:43 Here you can see the Prisoner from Chuckles' adventures in the first episode. (Bottom Right Corner) 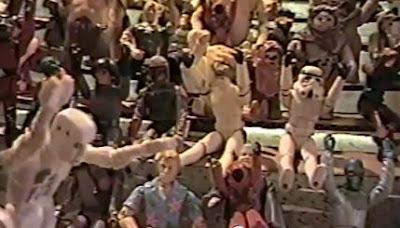 14:49 Boba Fett (the most bad ass vintage toy) takes out some rowdy concert goers that are blocking his view.

15:02 The third Max Rebo figure get to play the little Theremin I made for Derek in Animation Creation because he doesn't have an organ.

15:19 Lobot gets tied of a rowdy Ewok and throws him into Boba Fett. Then Fett deals with Lobot

15:37 The beaten Lobot bumps into Bespin Han Solo and he calls out Boba Fett. The riot is on! (having a riot during the 3rd song was pretty much the only plot point Derek gave me for the concert)

16:19 Sgt. slaughter's next idea is to dig their way out with "shovels". The toys would have had a hard time digging though the floor with plastic spoons, but had they been successful they would have just ended up in the drop ceiling of the floor below them. The dorm room is on the 7th floor.

17:24 We haven't heard from Spider-Man in a while, but it seems like he's on to something. It also seems like he's gotten better at using ticky-tac to stick to the walls.

17:31 Sorry Transformer fans that the closest thing your favorite toy line is getting to a mention. There are a lot of major toy lines that were left out of the show. Something I would try to correct if we were doing it over again. A little Monday Morning (9 years later) Quarterbacking.

17:47 This is the only episode with bad language.

18:04 The 90's Star wars toys had a very hard time standing on the carpet so they have to really hug the wall. It kind of works out though because it seems like they are sneaking into the hallway.

18:35 The ewoks fight over the one singers scarf that was thrown into the crowd just before we cut back to the heroes in the room

19:33 After Amanaman throws the organ into the bleachers Chuckles decides he knows when fun ends and trouble begins. So he heads off to his next adventure in the ceiling.

20:32 Drew, not being a child of the 80's, messed up the Animal Commercial song. It came off sounding like Sgt Slaughter doesn't care enough to know the words and even more mocking so we used this take.

21:20 I decided that it would be funny to show Shockwave again at the end of the episode when the toys are sitting around bored in an ice cube.

21:47 Since the toys always "die" when they try to escape I decided to have Shockwave pop apart 3/4 of the way through the thawing process. It's kind of in honor of my favorite X-Men, Iceman. In the early 90's I had the toy that would change colors when you put him in the freezer. I played with him all the time and one day I took him outside in the snow and his glue joint popped and he fell apart. After that every time I played with him one of the bad guys would "shatter" him, since he wouldn't stay together.