This is the final installment of Action Figure Advenuters: The Series Notes and Easter Eggs. I hope this will inspire you to check out Episode 8 if you haven't yet. It also gives you something to think about on a second viewing. We had such a good time makeing the seriesn, and I hope you have enjoyed watching it.

Episode 8 is the last one. Time to clean up the mess I made. The shots of dumping the toys segments from the opening are played in reverse.

A lot of the characters got new "title cards" for this episode.

2:04 Chewbacca is sitting with Shockwave's head and Budo's torso. If you've seen the entire series you know Shockwave cracked when he was thawing out after being locked in the mini fridge. There were a couple of other ad-libbed escape plans were animated for episode 7. When Budo's plan failed he preformed Seppuku and cut himself in half. These extra escape plans did not make it into the episode, but that is why Budo no longer has legs. 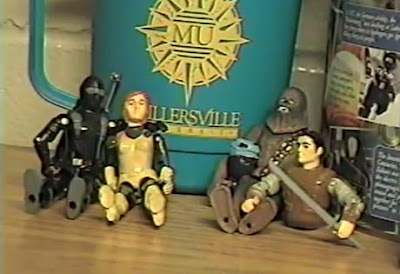 2:47 The giant is wearing a crew t-shirt for "The Warden". During my sophomore year of college, while animating this show I also help with a massive student film project going on in the communications department at Millersville University. Matthias Sundberg (the voice of Spider-Man in AFA) was making a superhero/vigilante movie set in Lancaster City. Most weekends I'd spend the early morning animating and then go out at night with the student film crew to shoot scenes for the Warden. I was an audio grip. I got to hold very still keeping a microphone just out of frame for hours and hours. It was a cool experience. Many people involved in the Warden provided voices for this show. Dave Ehrhart the voice of Han Solo played the masked Vigilante, Harry Turner who voiced Luke Skywalker was a producer, and Craig Carestia who voiced Crazylegs was the main production assistant.

3:45 Spider-man asks Snake-Eyes how he changed his cloths and points out that he can't. This contradicts a scene from earlier in the series when Han and Luke changed into Stormtrooper outfits. We were aware of this, but felt that the earlier story was funny. The current situation is sort of required to move the plot forward. So when writing the script we broke our own rule.

4:35 The website on the monitor is www.obscenenewg.com a site that my friends and I worked on at the time. A few of the things I wrote for that site have actually been reposted on this blog. 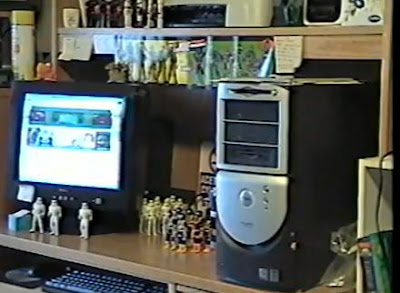 5:34 Most of the "wandering" bits in the ceiling between main plot points were just made up while animating. I wanted to work in some connections between the dorm room and Chuckles. He's been go for so long and I wanted there to be little reminders of home to him. Some of these things include the Ninja Turtles marble and the Mr. T. loot bag he using as a sleeping bag (earlier episode).

6:17 This is another ad-libbed Chuckles adventure. Chuckles is always righting wrongs and since the last time we saw the Cloner was during the Robot God adventure I decided to bring her back, but have Chuckles help her out.

7:23 After using the Star Wars Episode 2 Clone Troopers I decided to throw in the droid army as well.

7:56 The K'nex is another call back to the dorm room. Batman and Robin were going to escape using K'nex hang glider and that is when Chuckles decided to go up into the ceiling to find another way out.

8:32 I tried to keep the ceiling scenes a little dark. Some of the scenes in this episode are a little bright  to help make this guy appear clear.

8:45 The clear Halo Master Chief figure was sent to me as a thank you for filling out an online survey about my toy buying habits. I don't really remember it was emailed to me or part of a site I visited frequently at the time. 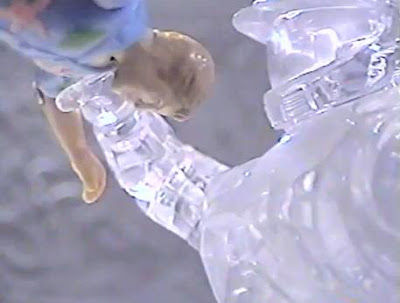 10:38 One last shot with the rest of the vintage collection. Barada, Blue Snaggletooth, Luke in Endor Poncho, Yakface, the Imperial Dignity, and Ev-99.

10:51 Fight + Win = Prize was the name of an animation in our show Animation Creation and seemed like a funny nod to that show and gave me something to do with these last few vintage Star Wars toys. 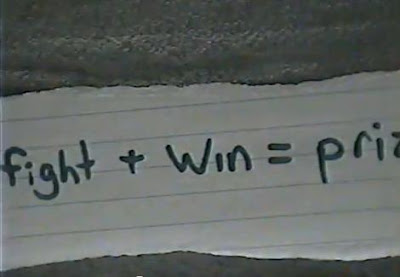 14:18 Knowing is half the battle, a reference to the classic GI Joe cartoon Public Service Announcements

15:56 Shockwave's head has been band-aided to Wolverine's back and Budo is getting a piggyback ride from Mr. T

16:10 I like that Derek wrote in that the two Storm shadows would spy on the heroes from the bunk-beds. It's an area of the room that wasn't seen much in the show. There was an ad-libbed escape plan that didn't make it into episode 7 that involved Spider-Man swinging Mr. T over to the beg on dental floss to see if there was a possible way out. 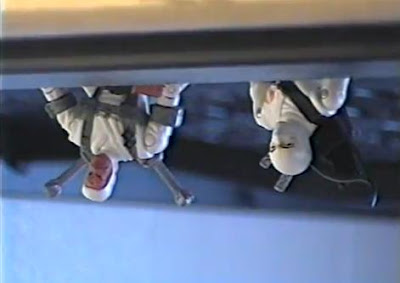 16:51 I love that Cobra Commander says "You know by now that their pathetic plans always fail". A funny reference to the fact that in the GI Joe cartoon Cobra Commander's plans fail every episode.

19:08 It was really hard to me to do this shot. To hit my '82 Cobra Commander with a door made me so sad. Most of the toys that were destroyed in the show (like Alpine) I bought a duplicate so as not to damage my figures.

19:19 The giant is wearing a GI Joe Official Fan Club t-shirt that was part of the membership package.

19:55 The student entering the building is Matthias Sundberg (the voice of Spider-man and Director of "The Warden")

20:22 Everyone who has gone to Millersville University has looked at the cage of rocks and wondered, what is this?

20:58 I used a low camera angle here to harken back to another video project Derek and I did. In Godzilla Flick, I again play a toy collector, but my obsession is actually Derek's kaiju monster collection in that project.

21:27 It turns out the three toys who escaped the room have been living outside in  shake made from the parts of the gliders. I unscrewed part of Crazylegs leg and removed on of Robin's shin guard to make them look a little worse for wear. I though about having batman's cape be missing, but he just doesn't look as cool without it, 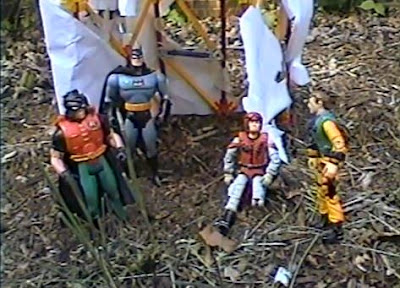 22:27 The campus tour continues showing off the pond, another well known spot in Millersville.

24:16 x4847 was my actual campus phone number when I lived in 702. I wonder if they even have the room lines anymore, now that everyone has a cell phone.

24:23 You can see that the toys strapped themselves to the animal using rubber bands. This was necessary to keep toys from falling off during all the driving scenes. So it was just written into the story 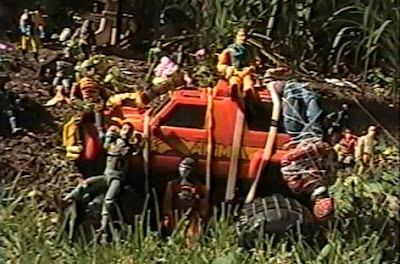 24:50 Does it feel like the story came full circle? Do you remember how episode one started?

25:00 Derek scripted the final line to be delivered by Clutch. I insisted that the line be given to Barbeque because he was the one who had previously referred to the room as hell.


27:28 The shot after the credits was filmed somewhere between Derek's house and mine. we set the toys up on the roof of my 1990 Buick Century with the camera on a tripod set for time-lapse photography.
Posted by Buzz Chuck at 3:47 PM