I was at my friend Paul's house today. He does a lot of buying and selling of vintage video games and toys. He had a box of He-Man and Thundercats stuff he wanted me to look though to see what was complete. All the He-Man guys were complete so that was good for him, but the Thundercats had very few accessories. He gave me a bunch of Castle Grayskull parts for sorting out the toys for him. As a kid I used to buy and sell Grayskulls all the time. I'd pick them up, take off the parts I need to complete mine and then later sell the other castle. I probably bought and sold 6 or 7 Grayskulls during my childhood. Eventually when I got out of MOTU stuff to focus on GI Joe and Star Wars I sold my complete Castle Grayskull I had worked hard to complete. Years later I picked up a Grayskull shell again. Paul knew I was looking for parts to it. 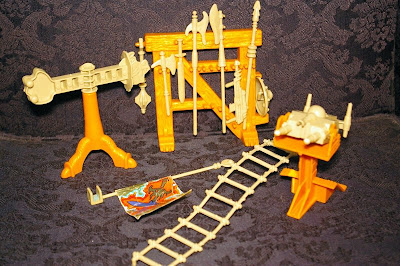