Here we are at episode 5 of Action Figure Adventures. The story is going to start moving towards the finale, but not without a few more figures attempting a crazy escape plan. In the past couple of episodes the events in the dorm room have focused on the Star Wars characters, but in this episode we shift back to the GI Joes. Clutch has a crazy dream that may help the heroes with their escape plans. 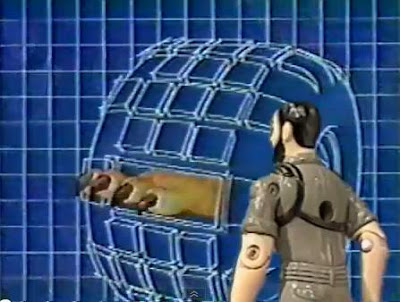 Later on Crazylegs explains his plan to free the toys from their current prison. Will his presentation to a panel of heroes have everyone on board? As I look at this screen shot I can't help but notice that the Marvel Super Heroes and the Ninja Turtle haven't done much in the show yet. 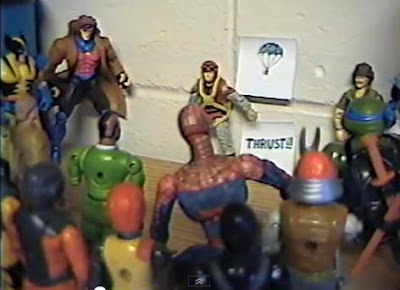 Oh wait, I spoke to soon, Leonardo (TMNT) speaks for the first time. Leo's rap was written by our head writer Derek Moench, but is voiced by Don Lansdorf. During one of the recording sessions for Cobra Commander, Don started rapping and imitating the style of different early rap artists. It became clear that he was the man for the job. Don took a copy of the script with him and months later sent us a recording with his beats and vocals. 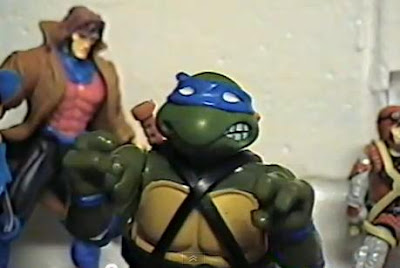 I wanted the show to feature a lot of different toy lines, but since my collection at the time was predominantly GI Joe and Star Wars they got the most characters. I also didn't want to put in too many different hero factions if we only has three villains. I originally was going to have the Joker be a bad guy, but with Batman and Robin being eliminated in the first episode it seemed odd to have the Joker left with no real adversary.

This episode also wraps up Chuckles' adventures with the Lego people. This is Chuckles most developed subplot to the main story, but I'm not sure if it's his weirdest story.