The Ghostbusters 2 Movie Masters Box Set contains the four Ghostbusters in their 2nd movie costumes with proton packs as well as including Slimer. I passed on this set a couple of times because I kind of would rather have them in their first movie colors. One time while on a Toy 'R' Us
run I didn't find anything I was looking for and these guys were marked down so I knew I had to grab them. I've gone back an forth about ordering the original versions of Peter and Ray that have been on Matty Collector .com

First up we have Peter Venkman (Bill Murray) 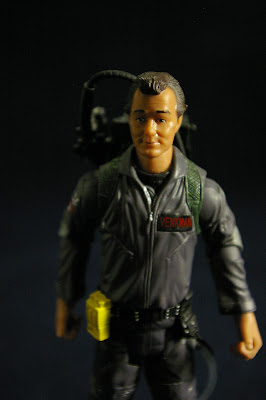 All the figures pretty much use stock bodies. They all have permanently attached proton packs and the "gun" can be clipped to their backpack or held in their hands. I think they did a really good job of capturing Bill Murray's likeness with the figure. This figure differs a little from the other three in that his pants are not tucked into his boots. (I wish I had taken a photo that showed this) 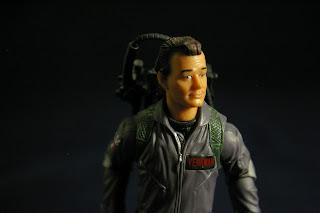 The next figure is Egon Spengler (Harold Ramis). Egon was my favorite character in the cartoon show. 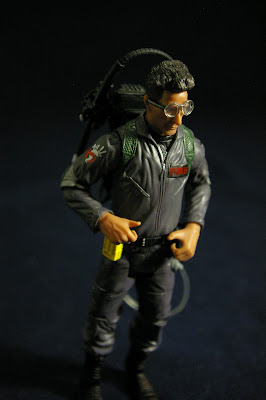 Egon like Peter has nice articulation and good paint applications. The details on the proton pack are really nice. His glasses are non-removable, but a separately sculpted piece. I go back an forth on this a lot. Glasses sometimes look weird sculpted straight on a head, but they often are a little too bulky as separate pieces. When I look at this figure I instantly think of John Tuturro (Barton Fink, O' Brother Where Art Thou, and Transformers) I did a quick Google search for the two actors and it turns out other people noticed it in real life not just with this action figure. 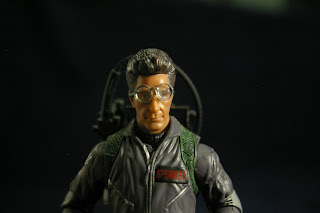 The third figure is Ray Stantz (Dan Aykroyd)  Ray is my favorite Ghostbuster in the movies. I'm a big Dan Aykroyd fan. 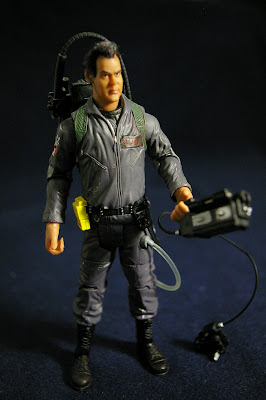 I am the most disappointed with the Ray figure out of the entire set. He head is a little to small for the body. It's just off somehow. I don't know if it is his hair sticking up so high that makes the head look weird or what. It looks like Dan, but doesn't fit the figure right. I also wish he had a slightly stockier build, but I understand Mattel's design system of reused parts. The set comes with one trap, I photographed it with Ray. The little doors on the trap even open up. 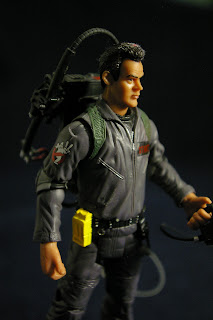 The final Ghostbuster to talk about is Winston Zeddemore  (Ernie Hudson) 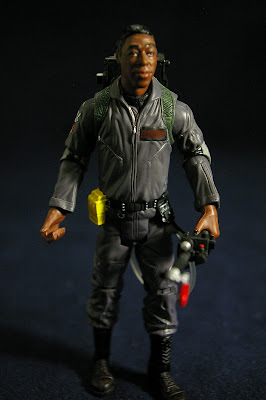 Again this figure looks great. Lots of details and hoses. He has an unpainted, but sculpted on mustache. This is because of Mattel reusing the head from the toy based on the first movie. I love the detail in the paint applications like put their last names on the patch on the front of their jumpsuits. The set also included a soft goods Santa hat for each of the Ghostbusters. They look okay, but are a little bulky. 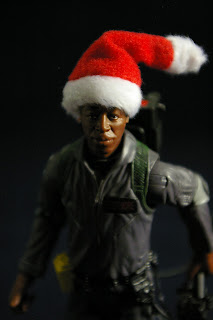 The final figure in this boxed set is Slimer! 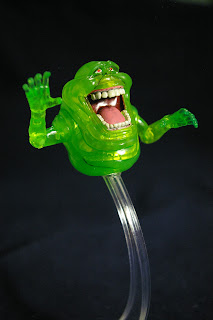 Slimer is made out of a translucent green plastic and comes with a clear floating stand. He has some articulation in his arms (shoulders and elbows). Mattel recently annouced they will be sending subscribers to the now canceled Ghostbuster line a free glow-in-the-dark Slimer figure. It will be this same Slimer just made from a different plastic. 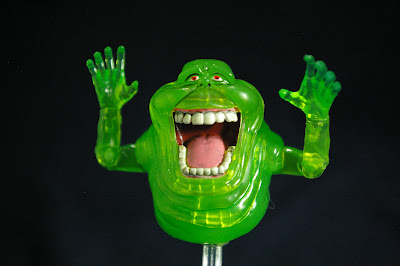 At the end of the day, the set isn't perfect, but it's still a pretty nice set and I'm glad I picked it up. I don't know if Mattel could do it, but I'd love to see these figure reissued in cartoon colored jump suits. I just always thought it would be neat to see the movie guys in four unique jump suits.
Posted by Buzz Chuck at 11:27 AM