Greg and I went down the Wizard World this weekend. This was the third time I've been to the Philadelphia Comic Convention. It's the second time in my adult life. I will probably do a couple posts in the near future about some of the stuff I picked up at the show, but this post features a few pictures and videos I took on my camera. I checked out all the toy dealers. I didn't really look around at any comic books. I did look at a couple pieces of original comic book art, but it's so expensive.

Like all conventions there were plenty of celebs to get autographs from. Nick Gillard who was the stunt and sword coordinator for the Star Wars prequels was there. I shot a few seconds of video of him showing a kid how to fight. The guys who played Chewbacca and Bobs Fett were there also. 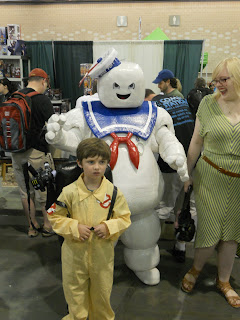 This Stay Puft suit looked so good. I think it's made of duct tape. It has a really good shape and nice details.  There were quite a few people dressed up as Ghostbusters, but I didn't see any other Marshmallow Men. 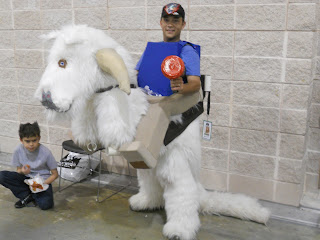 This Star Wars TaunTaun seems unfinished, but I still liked it. The "guy" looks kind of like a lego figure.
Posted by Buzz Chuck at 5:17 PM