I previously posted about custom action figures I made based on a video project my friends and I made called Wanderlust in the Realm of the Dawg. Since they were based on my group of friends (the actors in Wanderlust) they were used to portray us in our stop motion show, Animation Creation. We all look so buff and fit in the show because they are mostly based on GI Joe figures. 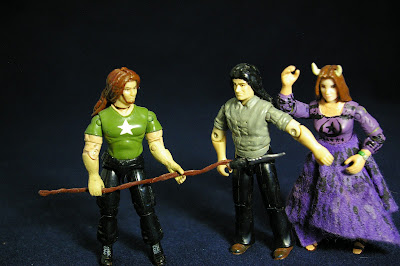 Here we see the Wanderer (Derek - gray shirt) defending the Horned Girl (Becky - purple) from the evil Thug (Brian - green). All the toys has odd double names because they were made to be the characters from Wanderlust, but then were used as characters in Animation Creation and were referred to by the actor/animator's names. (The Thug and Wander were covered in a previous post.) 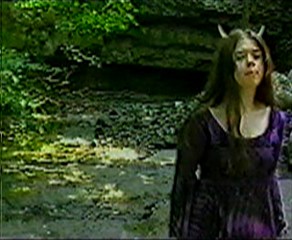 The Horned Girl is an interesting character because she walks the line between good and bad. Is she in love with the Wanderer or is she trying to play him? The Horned Girl was played by Becky who was dating Derek (the writer, director, and The Wanderer) and worked at the local comic shop. Becky was in Animation Creation briefly. She contributed to a couple episodes of the show and made it into the commentary, but didn't say much because during the school year (We were in college) Becky was always out of State (She went to school in Boston). 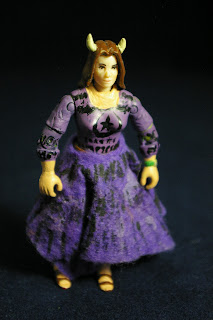 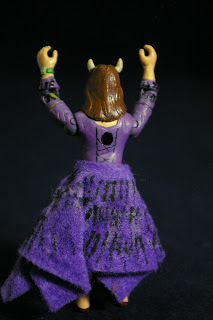 The Horned Girl figure is probably my favorite figure I made based on the movie. She looks a fair amount like Becky and she isn't overly bulky like some of the figures.

The one detail on Torpedo that I didn't remove was his sheathed knife. In the movie, the Horned Girl has a knife in the one scene. We never see where she carries it, but I took some artistic license since it was going to be more work to sand it off. 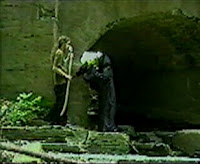 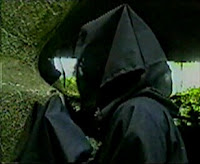 The Horned Girl is pretty much the only character that has a costume change in Wanderlust. We first see her when she attempts to stop the Thug from visiting the Oracle under the bridge. In this scene she is dressed in an all black robe that completely covers her. A little while later she removes the hood to spy on the Thug. 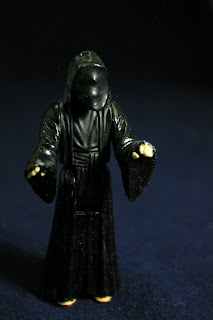 This figure was made by modifying a vintage Emperor figure from Star Wars. In Wanderlust the robe completely covers the Girl's hands and face. I added to the hood to make it cover her face. I couldn't think of a good way to cover the hands and still have them look okay. I ended up cutting off the hands and reattaching just the fingertips to give the illusion of longer sleeves. The entire figure was painted black and her feet were painted to look like she is wearing the same sandals as the other Horned Girl figure. This figure did not appear in Animation Creation.

The Oracle figure is very similar to the Horned Girl in robe figure. The Thug goes to the Oracle for a clue to help track down the Wanderer. The Oracle, dressed in a back robe with some necklaces, uses her urn to show the Thug (and the Horned Girl, who is spying) where the Wanderer is located. 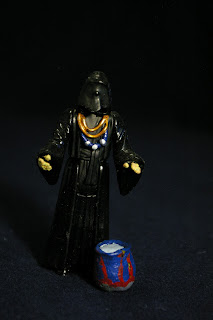 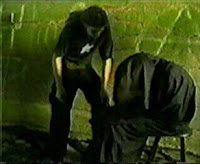 Again this figure was made by modifying a vintage Star Wars Emperor figure. the Necklaces were sculpted on and the magical urn was also made as an accessory for the figure. From a low angle you can see the Emperor's wrinkly face under the extended hood. This figure was not used in Animation Creation at all. 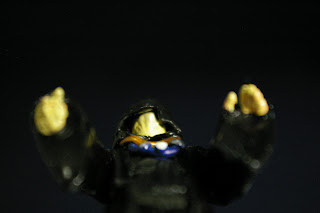 The events of Wanderlust in the Realm of the Dawg were all started by the Priestess when she created a small stone in the middle of a giant boulder field at day break. 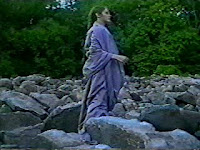 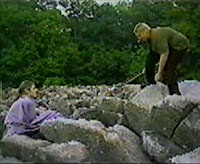 The Priestess figure was made from a vintage Star Wars Bib Fortuna figure that was modified with the head from a 90's Slave Leia figure that was also modified.  I wished the Priestess figure had  better articulation so she could sit like in the movie, but the vintage Star Wars figures made good bases for characters that wear robes and don't have much articulation. Megan, the girl who played the Priestess worked on one of the animations in Animation Creation, so this figure was also used in the commentary. Like Becky, because of school Megan could not bring a voice to her action figure, so we put in a joke about her still playing a character in our "silent movie". 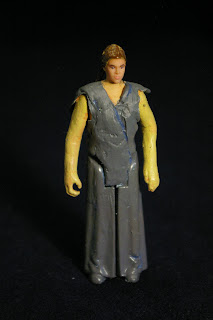 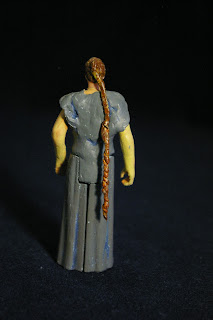 We have already talked about the Wanderer (who has wanderlust), so we need to talk about the Dawg. Well... the Dawg is a dog... and an evil overlord of the land. I'm telling you Derek started using the word Dawg before it was cool and long before American Idol. The Dawg was played by Megan's dog and she wore a few necklaces and sat on top a large rock and "barked" commands at his minions (The Thug and Horned Girl) who were both jockeying for favor in the eyes of the Dawg. 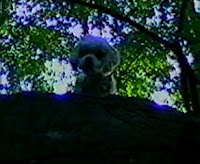 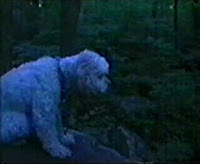 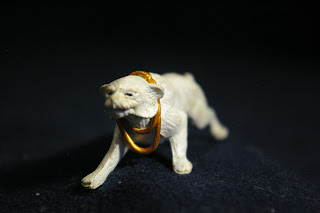 The Dawg figure is made by adding necklaces to Max the bobcat of Spearhead and Max fame from GI Joe. Of course Max was also painted white. 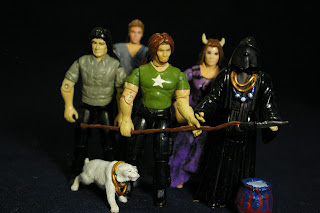 Here is a group shot along with a screen shot of the Wanderer warning the Horned Girl. As an added bonus I also included a picture of Derek (The Wanderer) playing his theremin, a funky electronic instrument which he demonstrates in one of the episodes of Animation Creation. 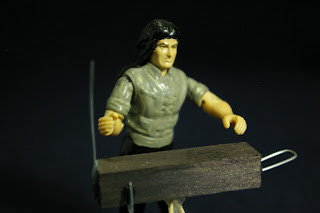