Well, I got out to the Flea Market across the bridge in New Jersey this weekend. It was a hot one, but it was nice to get out of the house for a while. My buddy that drove me was looking for tools, but I had my eye out for action figures. I saw a GI Joe Defiant Space Complex that had the main parts, but was missing most of the guts. I asked what they wanted... just in case but they wanted $200.00 for the thing. Oh well, not like I needed two any way. Later on I saw the bridge to the Toss 'n' Cross Bridge Layer in a box a guy was carrying out of his car. I peaked in as he set it on the table and I was happy to see a bag of GI Joe parts. So, I bought them... 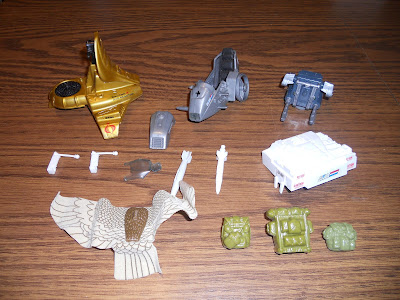 Serpentor's Air Chariot, Silver Mirage Parts,, and a Snow Cat Missile Rack with all it's tabs! Raptor's winged backpack is in good shape even though it's kind of folded up. (In this picture the are two identical mystery items -- the white side ways "L"s - Anyone know? Leave me a comment. I don't think they are GI Joe) 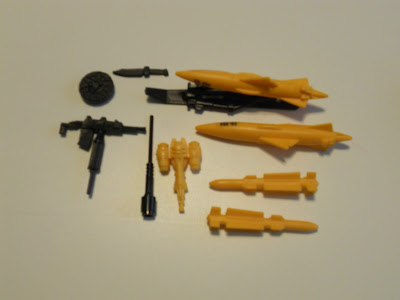 Here we have some more GI Joe vehicle parts. (Second Mystery Item - What is the yellow three barrel laser gun from? Leave me a comment... please.) 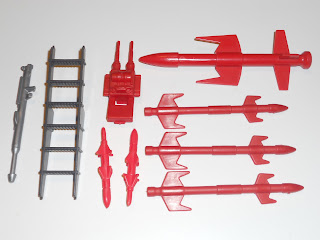 Missiles to the Mamba and Ferret, Tactical Battle Platform Ladder, and a gun to the Night Raven Drone. 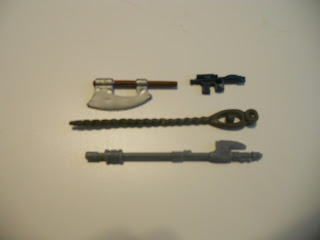 Some vintage Star Wars Weapons! I'm happy about the Stormtrooper blaster. I need a couple dozen of them and the Han Solo blaster to arm my collection. 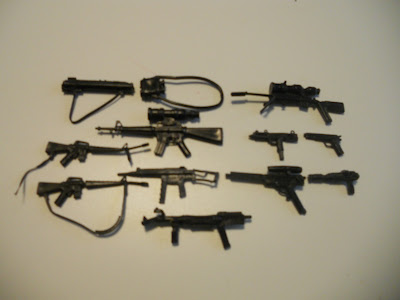 Here is a mess of GI Joe guns. I'm not going to name drop everyone here, but I am happy to have the bi-pod to Lowlight's sniper rifle and General Hawk's (v2) gun. 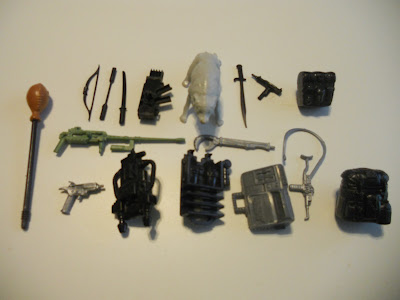 Here's the picture that's going to make everybody jealous that got got all this stuff for $4. Check it out Storm Shadow's (v1) Bow, Nunchuck, Sword and Backpack. Snake-Eyes' (v2) Wolf, Gun, and Sword. Plus three backpacks for Cobra Troopers (Eels, Techno-Viper, and Viper). Well, even if I got a little bit of sunburn I think it was worth it. Now I have to go threw and check off the stuff  I needed that I now have.
Posted by Buzz Chuck at 12:03 PM