Okay... today's post is not a typical post. No toy review or update about something new in my collection. All I have for you today is a status report of sorts.  I'm hoping to have a new video posted tomorrow which features a 2+ minute stop motion animation and toy review. I've been working on it for a while and was having some computer issues so it sort of got delayed and the focus of the review may even change a little.

My buddy Derek who I've known since 1st grade and my collaborator on the animated shows, Animation Creation & Action Figure Adventures, is leaving for Europe soon. I am hoping that everything goes as planned and that the last four episodes of AFA are uploaded to Youtube soon So we can continue to release them one a week. I hope you guys are checking them out and enjoying them. The first episode is a good start, but it gets even better after we worked out some kinks with that episode and move forward. So if AFA 1 didn't sell it, check out AFA 2. 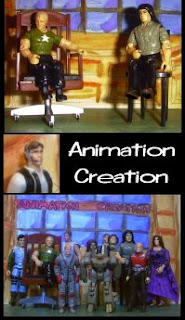 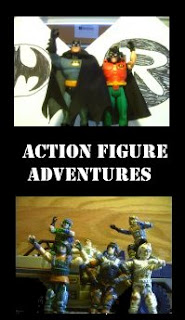 The other thing I wanted to talk about is friends and Fellow Bloggers (and I'm not causing drama).  A while ago while Derek was still working on editing the episodes of AFA he told me I should start a blog about the show. Something we could us as a platform to launch the show. A place to tell people to go to check out the show without just saying try to find it on youtube.

As he was talking to me about this I remember something another one of our friends has said to me a long time ago. Brian, (the voice of Clutch, Mr. T, and Gambit in AFA) told me that I should write something about all the 80's GI Joe figures and sort of explain how I got them or my impression of them as a kid. This was back when we were all working on another website (Obscene Newg). We haven't worked on Newg in a long time, and Brian decided to let the Domain name lapse when the time comes. I have actually  reposted some stuff from that site on this blog. It's also where our youtube profile name comes from. I have yet to follow through with Brian's idea... but I will.

So I had that in the back  of my mind and I started looking around at other blogs. Since I recently really got back into He-Man I studied a little of what  James from MOTU Figures  was doing. I love the videos he makes with his son. I also like that he spends the time to take really nice photos of the toys and posts them. James hasn't posted anything new in months and it's so disappointing since I check his blog everyday.

Another blog I began reading, which celebrates being a nerd, is Dave's Geeky Hockey. This blog doesn't focus on toys, but he designs hockey jerseys based on many nerd franchises. I bought the Voltron Jersey and posted about in on here. I was shocked when I checkout  his blog today to find out he is giving it up.

Since starting my blog I've been reading Action Figs & Things quite a bit.  ActionFig is my number one comment poster here. I really enjoy that fact that he and a group of other blogger mail each other figure off and on. It's nice to see the comradery. I'd like to maybe get involved in something like that eventually (when I get my license back and can go to the post office).

Finally I'll mention long time internet content generator and toy reviewer who recently launched his own site Pixel Dan. Dan's reviews of the MOTUC figures are a big part of what got me into them .There were a bunch of figures available on Black Friday that I was going to pass on, but my mind was changed each time after watching his review. He does and awesome job. I think about his reviews a little when I make my videos. He's done such a perfect job of showing off their articulation and features that I don't spend a lot of time talking about that stuff. I basically try not to be Pixel Dan. I look at it form the perspective of what can I offer that Dan didn't include. So that little animated segment is something goofy and fun I can offer and I state my opinion on the figure.

So, hopefully I will be posting a video review on Thursday, AFA Easter Eggs on Friday, and new AFA Episode on Saturday. We'll see what happens.