In 1982 the Car Bear craze started. Originally created as characters to put on greeting cards the Care Bears expanded into stuffed animals, cartoons, and plastic action figures. The Care Bears were one of the fun  80's properties that boys and girls could kind of share. They were definitely more girl oriented, but I liked watching the cartoon and playing with the toys with my sister. Kind of like once Mattel made She-Ra, boys and girls could play He-Man & She-Ra together. I recently came across these in my parents basement, so I grabbed them and photographed them for an update. Then I gave them to my sister for my niece. 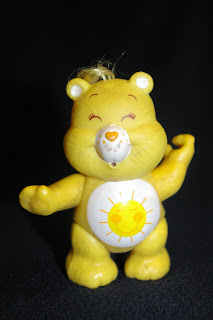 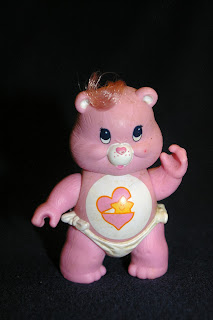 First up we have my sister's Care Bears. Funshine Bear and Baby Hugs Bear. I think Funshine was used in the cartoon a lot. I kind of remember thinking my sister had a main character. All the poseable bears had articulation at their head, arms, and legs. They also all features a little lock of rooted hair. 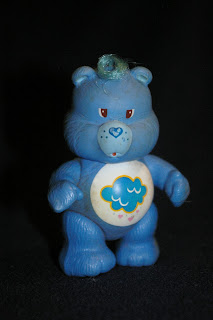 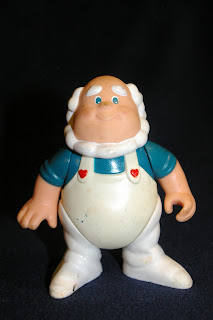 I don't remember having these two as a kid. The blue bear is Grumpy, and it is possible I had him as a kid, but I remember having Wish Bear who was kind of a mint green. (Maybe I had both bears) I think I bought the Cloud Keeper at a yard sale one time just because I thought I could use him as a janitor in an animation. As a kid I always wanted Tender Heart since he was kind of the leader of the Care Bears in the cartoon. He is a tan bear with a heart on his tummy.

My sister got the Cloud Mobile for her birthday one year. It was heavily features in the cartoon and we played with it a lot. It came with an umbrella, picnic basket, and blue blanket, which are probably packed in with my sisters Barbies. We used to play with the Care Bears a lot with a My Little Pony playset my sister had. It was a water toy and consisted of a cloud base, a rainbow, and a "floating cloud" that could "rain or shower" the ponies. It fit in well since the Care Bears spent so much time in the clouds in the cartoon. 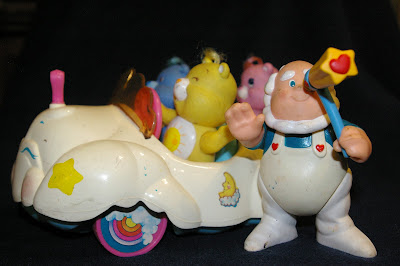 Here is a little group shot. The Cloud Keeper is holding Wish Bear's Star-A-Scope, proof that I'm not crazy and did have Wish Bear. In 1985 all the poseable bears started coming with an accessory.