Tomorrow we will release the third episode of Action Figure Adventures! Like last week I'm posting some notes or "Easter Eggs" about AFA Ep2 in the hopes that you will check it out, or to give you something to look for during a second watching.

During the opening, the cooler that gets dumped holds characters that we used in show. I wanted them to be on the top of the pile for the short animated bit at the end of the segment. The script wasn't finished yet, so the importance of characters hadn't really been established yet. This is how Wolverine got into that segment but never has a line in the show. This also explains why other characters who are in every episode aren't featured at the end of the opening.

2:15 Alpine and his bear are important in a  future episode. These are the types of things we were able to start working into episodes once the story line was more firmly planned out.

3:00 Clutch is holding a tool that comes with a Tech Deck toy skateboard.

Tiger Force characters (Trip Wire and Frostbite) were chosen as Clutch's helpers because their tiger outfits went with the animal.


4:35 The high tech rope of the future is actually US Army grade parachute cord. 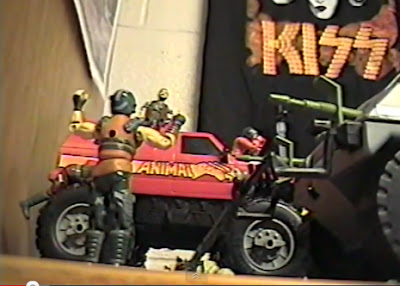 5:33 The line about the year was changed to 2004 during sound recordings to help make the show seem more current. The footage was shot in the fall of 2002. It still took forever to edit so the dialog change didn't make it very current in the end.

6:47 You would never have a plumbing trap in the ceiling. (I just wanted pipes up there)

7:50 The Star Wars characters start to develop their own story line. More about foiling villain plans rather than escaping.

The Jawa laundry pile doesn't appear in other episodes.

Derek decided instead of recording electronic beeps we would have the droids talk in old Nintendo Entertainment System (NES) sounds.

10:42 The Rolling Stones post card was specifially place on the wall close to the floor for this episode. (Usually we try to hide the ticky-tac used to hold figures in place, but this time Spider-Man show off that he uses it to help him stick to things.)

Matthias Sundburg played Peter Parker in another video project to come out of Millersville about super heroes and their relationships. He also voiced Peter Parker in the interview portion of Animation Creation 10 as a nod to this series (we were editing AC 10 as we made AFA2)

13:45 This scene contradicts a scene in a later episode were character talk about not being able to change cloths. 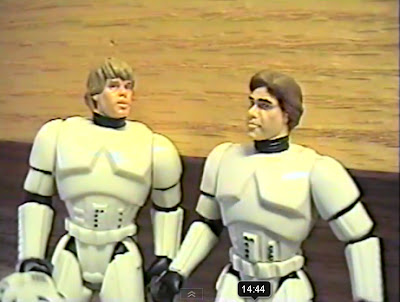 15:10 Homer Simpson is on top the villain base through the entire show, but isn't used as a character at any point in time. He was a dorm decoration before the show started. 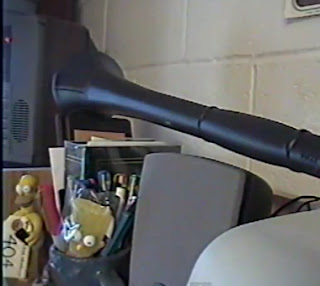 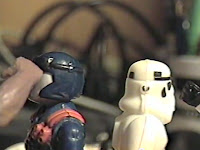 The APPS that Battle Force 2000 use didn't actually fire very well, but it looks petty good.

18:16 The entire hallway shot was done at 4 am one weekend so that I wouldn't have to
deal with people walking down the hall in the shot

18:55 The fake trash shoot set was built very early on and the segment was animated around the same time as the opening segment without a complete script.

19:14 There is a photo of Derek in the trash without his lower jaw. This is left over from the opening of Animation Creation (Our other animated show)

21:13 I tried to keep the ceiling scenes kind of dimly lit

21:44 They Might be Giants are one of my all time favorite bands. I've seen them in concert 15 times. The song Minimum Wage is probably one of their least well known songs on the most well know album (Flood).