I have finally posted all ten episodes of Animation Creation to the blog. I hope you check them out and enjoy them. (Quick Links to a couple of my favorite Episodes 3, 6, & 10) There is something in there for everybody. I also previously did a post about some of the custom action figures used in the show to represent the different animators. Today's post focuses more on the "extras". People that served as supporting characters, they contributed less to the show or were not seen as much. Some of these figures are sneak peaks at characters that would have been used in future episodes of the series if we had made a second season.

When we were making the Pencil Animation in Episode 3, Derek's roommate did a section of the animation. We has a toy of everyone else from the Wanderlust figures I had made so we need a quick Keith for the commentary. I had only met Keith one time before when we ran into him on South Street in Philly. So, his figure is probably not a very good likeness, but in the end it doesn't really matter. Once the figure was made I started using in for odds and end shots in the commentary and he got a small part in the Behind-the-Scenes of Episode 10. Brian and I came up with an idea for a funny way to write Keith out of the show if we moved on to a second season because after Derek graduated from La Salle, he wouldn't be around to voice the character. 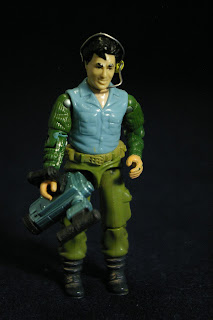 Head: Thrasher v1 with the green stripes painted black
Torso: Shipwreck v1
Arms: Skidmark v1
Legs: Bazooka v1
His headset is made out of a small piece of wire. 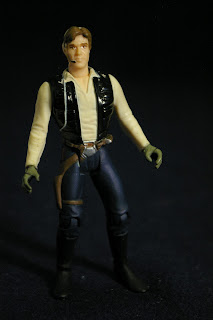 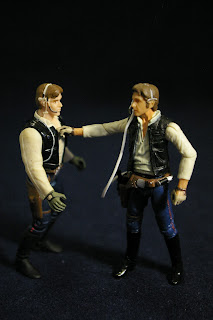 The first time we has a quest animator on the show (Brian) there needed to be a way for his head to be handed to Kevin so they could "share" the body. I tried to think of a toy that looked like a production assistant, and instantly though of this Han Solo figure because he had the headset. He's from a 90's Millennium Falcon Playset. I actually think I first used a different version of the "Pilot" Han and then switched to this one because he has knee joints. When they came out with a newer 2000's  version that was super articulated I picked him up in case we ever continued on to the second season.

We acknowledged that Harrison Ford was our production assistant and in Episode 6 he got to speak and factor into the plot. We pulled a similar gag in the 10th episode as well. 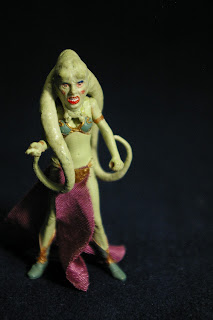 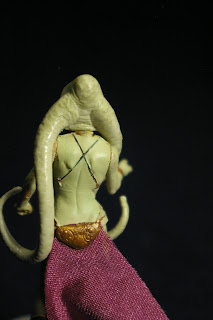 After making the Priestess figure from Wanderlust I had a Slave Leia body laying around and a vintage Bib Fortuna Head. I had ticky-tacked them together and just had in sitting on my work table. When we wrote Episode 10 and needed a huge crowd of attractive fan girls and well as a bunch of  unattractive fan girls i decided it was time to finish off this creation. I painted up the flesh on the body to match the head (a tricky color to match) and then painted on some make-up to try to give the face a more feminine appearance. This figure is kind of disturbing, but was funny in the context of the show. 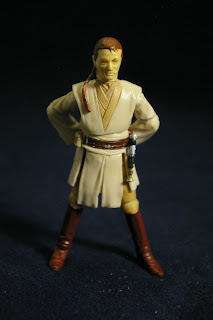 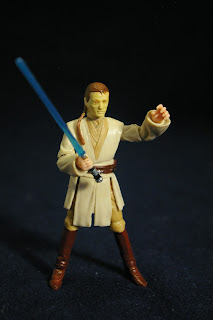 
I wanted to do either a Clone Wars series of animations or a web comic at one point. I planned to use the Star Wars characters (Obi-wan and Anakin) but also have them run into the Animation creation guys as Jedi. Derek was going to be a Jedi Master, I would be his Padawan  and Brian was going to be a Sith Lord. I was trying to decide what to do with Greg. I made the Padawan and never finished the rest. As usual I used a Rip Cord v1 head (GI Joe) and put it on a super articulated Obi-Wan body from RotS. I painted the under tunic a different color to help change my appearance a little. I clipped the Padawan braid off an AotC Anakin I picked up at a yard sale. I debated about putting glasses on my figure since I wear glasses... but who ever head of a Jedi with glasses. I still has an extra Obi-Wan body and Count Dooku body on my work table if I ever made Derek and Brian. While talking with Brian about plot ideas for the second season I also considered just using this as my Halloween costume in a themed episode.