So all month MattyCollector.com is running their SDCC's Most Wanted Sale. They are taking 10% off their essesial items and have some other reissue items available. I like to support the line so I decided to get a 2nd Wind Raider becuase I really want more MOTUC vehicles. I didn't have Vikor or Sy-Klone so I needed to order them. I have been thinking about ordering some of the "essential" figures so I don't have to keep digging mine out of the display case to animate, plus I thought if kids come over they could play with them. I got duplicates of  He-Man, Battle Cat, She-Ra, Bubble Power She-Ra, Swift Wind, and Hordak. 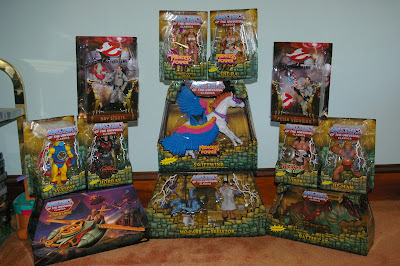 I picked up the two Ghostbusters (Ray & Peter) that they keep in the Essentials Collection because I have wanted to get the all the Ghostbusters in the 1st movie jumpsuits. I also picked up one of the most hated packs in the history of MOTUC,  Mo-Larr vs Skeletor pack. I actually already own it, but I wanted one to open. Being a toy collector and a stop motion animation enthusiast, Robot Chicken is awesome to me. My still sealed Mo-Larr vs Skeletor pack is the very first MOTU Classics toy I bought. It's what sucked me into the line, followed quickly by the Skeletor vs Lex Luthor comic pack. So now I have a loose Mo-Larr and I'm giving Skeletor a different head and he will be used for animations and for kids to play with. I put the Alcala Skeletor head that came with Demo-Man on my comic pack Skeletor. It's a big three way trade.