Mattel's "Blazing Sword Voltron" is by no means new, but for some reason I just never posted any thoughts on the toy. I took these photos months ago. Originally released as a SDCC exclusive, Blazing Sword Voltron was later available on MattyCollector.com. This is the most well articulated Voltron ever made. He has a ball jointed neck, an ab crunch, shoulder, elbow, hip, and knee joints. His hands have spring-loaded jaws that snap close and articulation at the necks of the lions that make his feet. The figure is also cartoon accurate. This means there is no chrome and the legs on the lions magically disappeared when they formed Voltron. He comes with two different versions of his sword, Blazing and and non-Blazing. Unfortunately there was no shield included with him. 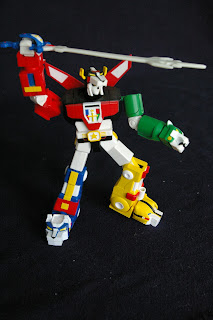 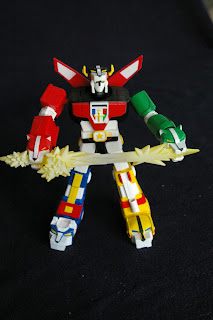 Even though he is cartoon accurate the green lion and red lion seem very strange without legs. The yellow and blue lions have white circles where the legs should be and it give him just enough detail that it doesn't seem like somethi8ng is missing. I wish I could remember if I ever notices the missing legs in the cartoon as a kid. Everyone always wondered where Optimus Prime's trailer went, but what about the lion's legs? Maybe I just assumed they folded up inside of him. Both swords are very nice, but  I display mine with the Blazing Sword. It's different, and is in this figures name. 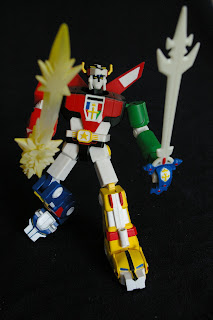 If you are a Voltron fan and you don't want to invest in one of the vintage or the new large scale Voltron this guy is a very affordable option. He comes in a coo box with as speaker that plays audio from the opening of the cartoon show.
Posted by Buzz Chuck at 10:34 AM